The Fordham University Sailing Association is the primary support entity for Fordham Sailing. It consists of 278 members… the Afterguard, i.e., former members of the Sailing team; other Alumni; Parents, and Friends of Fordham Sailing. Nine officers compose the Board of Governors.

The Sailing Association assists the team in a number of financial and non-financial ways, e.g., as chaperones or host/chaperones at away regattas; providing recruitment leads; serving as Race Committee, and assisting our student-athletes obtain internships and other employment opportunities.

In 2005, the Sailing Association initiated an effort to create a $1 million Endowment to establish a fund to finance the recruitment and continued employment of a professional coach, which is critical to the long-term success of any program. Over 40% of our target has been reached. If you are able and willing to help us achieve this important goal, please contact us at Sailing@Fordham.edu

In 2010, to commemorate the 60th Anniversary of its founding and the 10th Anniversary of the rebirth of the Sailing team, the Sailing Association hosted a gala dinner at the New York Yacht Club in Manhattan. Mike Mullarney was Dinner Chairman. Among the 165 guests were Morris Yacht & Beach Club Past Commodores Steve Breines and Glenn Vitaglione; alumnus Tom Harrington, now Past Commodore of New York Yacht Club; Joseph M. McShane, SJ, President of Fordham University, who honored us with his welcoming remarks, and Guest Speaker, US Sailing President Gary Jobson, who topped off the evening’s festivities with a dynamic presentation.

A three-month, $100,000 fundraising campaign to finance the purchase of new boats, sails, dollies and a power boat was initiated prior to the dinner, and in combination with the dinner proceeds, netted $153,000 for the program. The surplus became the seed money, which allowed our program to hire its first, professional coach.

During the dinner, Mr. Mullarney announced the creation of the Fordham Sailing Hall of Fame. The following six sailors were the initial inductees. 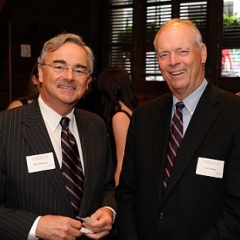