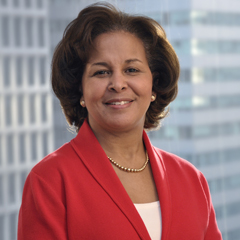 Patricia David is a managing director and the global head of diversity for JPMorgan Chase. She is responsible for developing and implementing a diversity strategy for the organization in line with the business strategy.

She is responsible for working with key business partners to design, implement, track, and report on the ROI of various diversity initiatives and leads the JPMorgan Chase Diversity Council in collaboration with key business leaders. She is responsible for communicating diversity efforts within the organization through various means, and for working with the HR community to implement affirmative-action plans and ensure compliance.

Prior to joining JPMorgan Chase, David was a managing director and the global head of diversity for Citi’s Institutional Clients Group, where she was responsible for overseeing, developing, and implementing the overall diversity strategy for this division. Her office was responsible for ensuring that these businesses promoted fair and equitable employment opportunities and fostered recruitment, mentoring, and promotional opportunities for women, minorities, and underrepresented groups.

David joined predecessor firm Salomon Brothers in 1996 as a manager in the technology division responsible for global human resources systems, purchasing, payroll, and a series of financial systems. In 1999, she also assumed the role of chief of staff for the division’s chief information officer. She was responsible for overseeing non-project-related activities, specifically as it pertained to budgeting, headcount reporting, compensation, expense management, and status reporting and presentation management. At this time, David also was responsible for implementing process and productivity improvements within the technology division. She was promoted to managing director in 2001.

Prior to joining Citi, David worked for Merrill Lynch in New Jersey for 10 years, leaving that organization as a vice president and manager of financial systems in the Technology Division.

David is an active participant in various efforts for underrepresented groups in business and a thought leader on behalf of several diversity organizations.

In May 2014, she was recognized as a top executive in diversity for outstanding business achievement by Black Enterprise Magazine, and during that same time, she, along with 18 other women, was inducted into Spelman College's Academy of Game Changers.

In 2012 she was selected by The Network Journal as one of 25 Influential Black Women in Business, as a Top Diversity Executive by Black Enterprise, and by Savoy Magazine as one of its Top 100 Most Influential Blacks in Corporate America.

She has been featured/interviewed in several diversity publications.

Born in Birmingham, England, David received a BS in finance and economics with a minor in accounting from Fordham University in 1981. She has two children, and her husband is a former Marine.