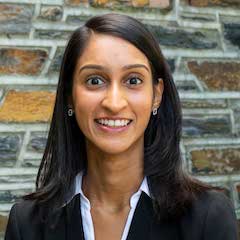 Sasha Ann Panaram’s research focuses on twentieth and twenty-first century African American and Caribbean literature and culture, with a particular interest in women’s and gender studies, as well as slavery studies and performance studies. Panaram’s current project examines rewritings of the Middle Passage in creative and critical works by African American and Caribbean women writers such as M. NourbeSe Philip, Paule Marshall, Octavia E. Butler, and Toni Morrison. Bringing together Caribbeanist philosophical writing on crossing with research by North American scholars on Black feminisms and geography, she argues that Black women writers craft their texts as pedagogy and praxis to reveal how Middle Passage movements inspire important forms of embodiment that are passed down through generations. Her research is published in The Black Scholar. Other public scholarship and interviews have appeared in The Los Angeles Review of Books, The Brooklyn Rail, Hyperallergic, and Black Perspectives, the award-winning blog of the African American Intellectual History Society. From 2018 to 2020, she served as a co-host of the weekly webcast Left of Black.