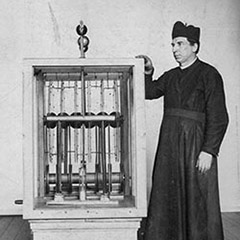 Thomas Freeman with a Wimshurst Electrical Machine built by him and others.

Thomas J. Freeman, SJ
Thomas Freeman, SJ was professor of chemistry, physics, and math from 1872 until his death in 1907. Freeman Hall, the home of the physics department, is named in his honor. 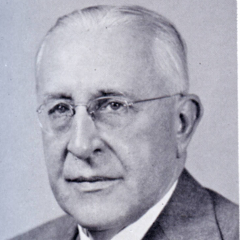 Victor Hess, 1936 Nobel Prize Winner
Born in Waldstein, Austria, in 1883, Victor Hess studied at the University of Graz (1901-1905) and worked at the Viennese Academy of Sciences (1910-1920). He realized during balloon ascents that high-energy radiation in the Earth's atmosphere originated from outer space. For his work on cosmic radiation, he shared the 1936 Nobel Prize for Physics. In 1938, he immigrated to the United States and joined Fordham University as Professor of Physics, where he remained until his retirement in 1956. He died December 17, 1964, in Mount Vernon, NY. 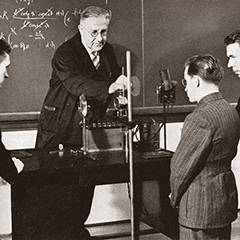 In honor of Prof. Hess, the physics department bestows the Victor F. Hess Award to the graduating senior who has the best record of achievement and service in physics. The Fordham University Library Archives & Special Collections is home to 34 linear feet of Prof. Hess's correspondence, studies, reports, and articles spanning the years 1910-1968. 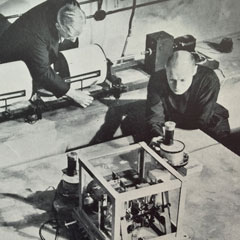 William Spain Seismic Observatory
The physics department operates the University's Historic Seismic Station. The science of earthquakes began to be studied at Fordham in 1910 in the basement of the Administration Building. Rumblings from the offices of the University president apparently disturbed the sensitive instruments and in 1923, the University constructed a new seismic observatory, donated by William Spain and dedicated to the memory of his son William. The observatory was built on the site now occupied by Loyola Hall and was moved first to the site of Keating Hall in 1927 and in 1931, to the present site east of Freeman Hall. According to Dan Kern '30, for several years no machinery was used to cut grass in the area of the observatory because the grass-cutting machinery would have disturbed the instruments. Instead, a horse was kept on campus for the specific purpose of trimming the grass in the area of the observatory. A plaque of St. Emidio, the patron saint invoked against earthquakes, hangs on the door of the observatory building.

Currently under the direction of Dr. Benjamin Crooker and Dr. Stephen Holler, the station now has a state-of-the-art broadband seismometer and also houses a strong motion detector under a USGS program to assess earthquake risk remediation in large metropolitan centers. Data from the station is streamed to the USGS data repository in Boulder, Colorado. Fordham is also a member of the regional Lamont Cooperative Seismic Network, which covers most of New York and New Jersey. Students in the environmental science program will have access to 10 years of high-quality digital seismic data for research purposes by virtue of Fordham's membership in these networks. In addition, equipment such as geophones and seismometers would be available for local research projects on loan from the Fordham Seismic Station or from the Lamont Cooperative Seismic Network consisting of 21 broadband seismographic stations in New York, Connecticut, New Jersey, Pennsylvania, Delaware, and Maryland.

Professor Crooker and the Seismic Station were featured in a 2006 New York Times article entitle As the Earth Shakes, a Machine Below the Bronx Takes Note.