*Available to students on both campuses, but certain required courses may only be offered at Rose Hill. Applicants interested in pursuing the program from Lincoln Center can seek approval from the dean of their college after enrollment as part of first-year academic advising.​

Understand the complex interactions of economics, politics, and cultures driving the global economy. 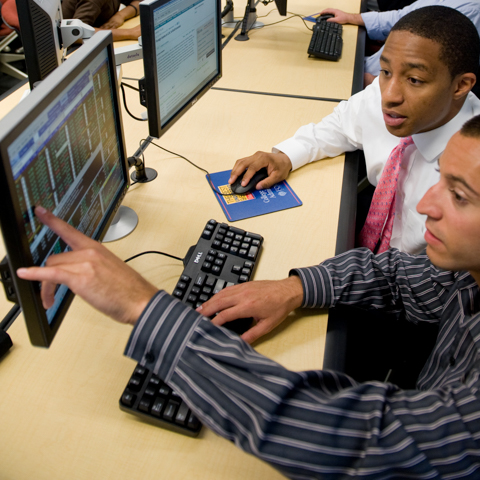 How do businesses, governments, and people in our interdependent global economy make sound—or risky—economic decisions? What are the factors, motivations, and contexts underlying those choices? In the international political economy major at Fordham, we take an interdisciplinary approach to finding answers to these questions.

Economic systems don’t occur in a vacuum. That’s why we turn to history, political science, and anthropology to deepen our understanding. You must have a high GPA to pursue this major and a keen interest in the world outside our borders. You’ll graduate with a clear and concise approach to critically assessing a wide range of issues.

Good teaching is a top priority for our faculty. We keep class sizes small, the coursework engaging, and the standards high.

Because of its rigor, the international political economy major is open only to students of Fordham College at Rose Hill who have a cumulative GPA of 3.0 or better.

You take eight core courses in political science, economics, anthropology, and quantitative techniques and then specialize your studies further with four electives according to your interests.

Special tracks in language study and global business will make quite an impression on graduate schools and employers.

Integrate academic work with practical applications. World-class internships at top companies and nongovernmental organizations are just a subway ride away. Many lead directly to jobs.

Want to connect and network? Here are two ways:

You’re not required to study abroad as international political economy major—but is there a better way to deepen your understanding of the world?

Fordham has connections with more than 150 programs in universities all over the world, including Germany, China, Turkey, Argentina, and the Gabelli London satellite campus.

International political economy majors pursue diverse career paths. They’re prepared to follow their interests no matter where they lead around the globe. Where will you go?

Our graduates find fulfilling roles in:

Many advance to graduate and professional studies in:

A few of their employers:

Eager for guidance from a Fordham graduate? Our program maintains an up-to-date list of people who are happy to talk to you.