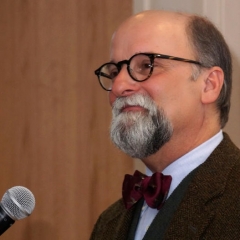 Paul A. Cimbala received his A.B. from St. Joseph’s College (now University) in Philadelphia and his M.A. and Ph.D. from Emory University in Atlanta, Georgia. Prior to his arrival at Fordham University in 1987, he held an editorial appointment with the Black Abolitionist Papers Project at Florida State University and taught at the University of South Carolina at Aiken. His research focus is the era of the American Civil War. He teaches courses on the Civil War and Reconstruction, war and American society, and the American South.

Dr. Cimbala is the author of Under the Guardianship of the Nation: The Freedmen’s Bureau and the Reconstruction of Georgia, 1865-1870 (1997, 2003), which received the Malcolm and Muriel Barrow Bell Award of the Georgia Historical Society, The Freedmen’s Bureau: Reconstructing the American South after the Civil War (2005), Soldiers North and South: The Everyday Experiences of the Men who Fought America’s Civil War (2010), and Veterans North and South: The Transition from Soldier to Civilian after the American Civil War (2015). He is also co-editor of several essay collections dealing with the Civil War era, including, with Randall M. Miller of St. Joseph’s University, Union Soldiers and the Northern Home Front: Wartime Experiences, Postwar Adjustments (2002) and The Great Task Remaining Before Us: Reconstruction as America’s Continuing Civil War (2010). He most recently co-authored with Dr. Miller The Northern Home Front and the Civil War (2017).

Dr. Cimbala participated in the editing of a volume of original documents in The Black Abolitionist Papers series dealing with African Americans and anti-slavery in Canada (1986) and has published articles, book chapters, and essays on slavery, Civil War soldiers, the northern home front, and the Freedmen’s Bureau, one of which received the Alex W. Bealer Award of the Atlanta Historical Society. He is completing a monograph titled Soldiering behind the Lines: The United States Army’s Veteran Reserve Corps during the Civil War and Reconstruction and a new annotated edition of Stephen Crane’s The Red Badge of Courage. He is also at work on a study of Civil War general and Reconstruction politician Adelbert Ames and his family during the 19th and 20th centuries. He continues to pursue his interest in the Freedmen’s Bureau with an exploration of the agency’s last days and the impact of its demise on the progress of Reconstruction. Dr. Cimbala is the founding editor of two Fordham University Press book series: The North’s Civil War and Reconstructing America. He edited those series from 1995 into 2012. When not teaching or writing, he lectures to Civil War Round Tables on various aspects of the war and Reconstruction. Most recently he revisited his past connections by presenting a lecture on the Freedmen’s Bureau as the Dr. Edward J. Cashin Memorial Woodrow Wilson Lecture sponsored by Historic Augusta, The Center for the Study of Georgia History, and Augusta University and by appearing with Randall M. Miller at the Library Company of Philadelphia to discuss their work on the northern home front during the Civil War.