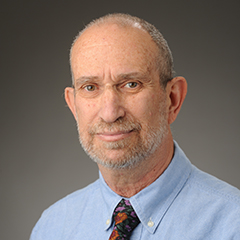 A specialist in the interaction of class, racial, and ethnic identities in the labor movement and wider political culture, he has published articles on "'Wage Slaves' and 'White Niggers'" (recently republished in the Garland Press anthology, Critical Race Theory), "Let Them Eat Multiculturalism", a review essay of Nathan Glazer's new book, We Are All Multiculturalists Now, in New Politics (1997), as well as articles on [white] labor's understanding of African American slavery, the history of social scientific constructions of race and ethnicity, and the historiography of American immigration. He is currently at work on a study of the shifting ideological vision of immigration historians, and a study of the importance of "somewhat white" ethnics in affirming and undermining America's racial boundaries.

Dr. Goldberg is currently Associate Chair for Undergraduate Studies at the Lincoln Center campus where his courses include the American history survey for the core, as well as elective courses on "Ethnic America", "American Pluralism", and "Civil War Era". At the graduate level he teaches a seminar on "Race, Ethnicity and Americanism".