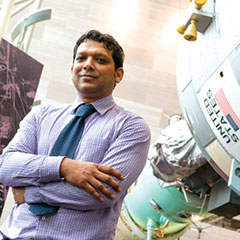 Dr. Siddiqi specializes in the history of science and technology in the 19th and 20th centuries, with a particular focus on communities and practices operating globally and under conditions of stress and scarcity. A large part of his writing has focused on modern Russian history with a specific interest in Soviet scientific and space activities. His publications include many sole-authored books, edited volumes, special issues, refereed journal essays, and popular articles. His scholarship draws from a diverse and interdisciplinary range of knowledge systems, including the history and theory of technology, science and technology studies (STS), postcolonial studies, and Slavic studies.

His last book, The Red Rockets’ Glare: Spaceflight and the Soviet Imagination, 1857-1957 (Cambridge UP, 2010) reconstituted the intellectual roots of cosmic enthusiasm in Russian culture in the 19th and 20th centuries and bridged them with the more practical attempts of amateurs and the Soviet state to launch rockets. The book is the first archive-based work to reconstruct the efforts that contributed to the launch of the Soviet Sputnik satellite in 1957.

More recently, his work has gravitated into global directions — including South Asia and Africa —  with an interest in ‘connected histories’ of science and technology. Some of this new work focuses on the ways in which space technology has disenfranchised, disturbed, or dislocated communities across the globe in the guise of Cold War scientific internationalism.

A second thread of his writing is on the history of the Stalinist Gulag. He is working on a major project, under contract with Oxford University Press, mapping the intersection between scientific expertise and large-scale incarceration.
A third new thread of work deals with ‘normative’ practices of secrecy in the history of science and technology.

He is also writing a second book, provisionally entitled Departure Gates: A Postcolonial History of Space Infrastructures, under contract with MIT Press. This book is an attempt to wrest the history of space exploration from its normative fetishization of Western triumphalism in the form of machines, men, and manifest destiny. Instead, the book highlights the considerable infrastructure built in the Global South during the Cold War to support space exploration, and in doing so, proposes an alternative, postcolonial, and global history of spaceflight, one that happened not in space, but on Earth. It argues that space activities during the Cold War, typically associated with high-minded utopian impulses or bipolar superpower competition, simultaneously engendered conditions redolent of colonial modes of exploitation, displacement, and erasure. These practices were reproduced globally in fluid networks through exchanges of experts, technologies, and knowledge.

He is also under contract to write a fully revised version of his first book on the history of the Soviet space program, which covers everything from its beginnings in occupied Germany in 1945 to the collapse of its Moon program thirty years later. Provisionally titled The Soviet Union and the Space Race, the book will be published in two volumes by the University of Nebraska Press.

He is also editor of a forthcoming volume of essays entitled One-Track Mind: Capitalism, Technology, and the Art of the Pop Song that is under contract with Routledge Press for publication in their Studies in Popular Music series. With contributions from Simon Reynolds, Oliver Wang, Gina Arnold, and many others, the book convenes a diverse gathering of scholars and journalists to write in-depth essays about a single song as a way to explore the history of popular culture in the late twentieth and early twenty-first centuries.