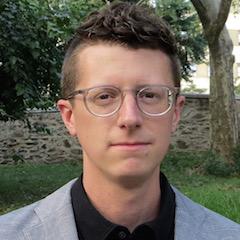 Zachary Stewart specializes in the art and architecture of medieval Europe. His research focuses on the architectural history of medieval Britain. His current book project, “The Parish Church Transformed: Architecture, Identity, and Community in Late Medieval England,” expands established accounts of Gothic architecture by demonstrating that formal integration—the quality for which the style is widely lauded—was not only a means of achieving spatial unity but also a method of confronting, controlling, and contesting social diversity in medieval Europe. Other studies in progress investigate the selection of royal burial sites in thirteenth-century London, the organization of communal building projects in fourteenth- and fifteenth-century Norwich, and the textual, pictorial, and spatial expression of lay devotion in pre-Reformation England. Stewart has received fellowships and grants from the US-UK Fulbright Commission, the Andrew W. Mellon Foundation, and the Center for Advanced Study in the Visual Arts (CASVA). He was a Core Lecturer for Art Humanities at Columbia University in 2015–16.