The Department of Sociology and Anthropology hosts and co-sponsors many events throughout the academic year. All faculty, undergraduate and graduate students are invited to attend.

Browse the upcoming and past events below: 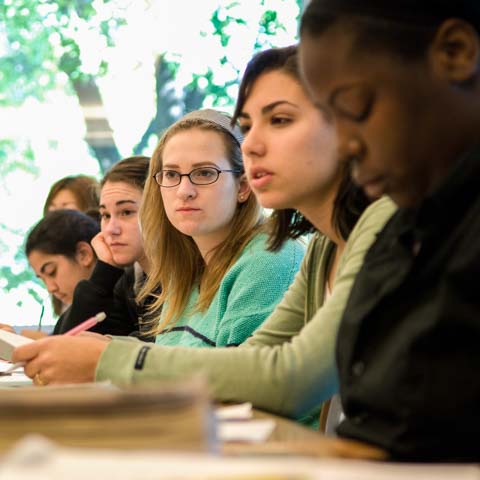 Join the Department of Sociology and Anthropology students in presenting their posters. Each student will have an opportunity to talk about their work and research. Refreshments will be served.

Racial and Generational Differences in Suburban Outcomes Among Hispanics in the U.S. 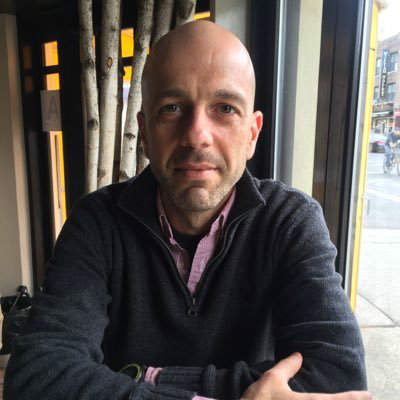 The present study examines the suburban attainment outcomes among Hispanics in the United States compared to non-Hispanic whites and blacks. The U.S. Hispanic population not only has significantly increased in size since the early 2000s, but also has become more diverse with respect to their racial make-up with increasing numbers of Hispanics identifying as non-white. Therefore, the study of racial and generational differences among Hispanic immigrants' residential outcomes allows us to test the extent to which race may, or may not, influence their socioeconomic and residential outcomes as outlined by the traditional models of residential assimilation. The results reveal that the process of securing a suburban residence among Hispanics relative to non-Hispanic whites and blacks varies by race, ethnicity, and generational status, even when controlling for differences in socioeconomic status and occupation. Future research priorities and policy implications will be discussed. 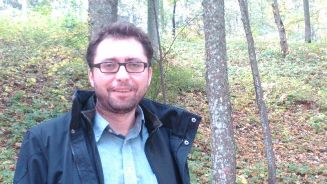 Dr. Amado Alarcon is a professor of sociology at Universitat Rovira i Virgili, Spain.

The association between unskilled migration and Spanish language has been common in collective representations within the US. In this presentation we consider to what extent the new economic conditions and new skilled migration of the so called informational capitalism is leading to the formation of better job opportunities and new and positive social representations around the Spanish language among Spanish speakers. Empirical evidence comes from in-depth interviews with first generation Mexican and Spanish migrants in the telecommunications, financial services and higher education. We focus in the role of the Spanish language in the access to employment and to career development in large corporations based in the United States and oriented towards the internal market. We discuss consequences of this infrastructure of language pride over expectations generated in US towards a greater social equality among linguistic communities in the US based on market factors. 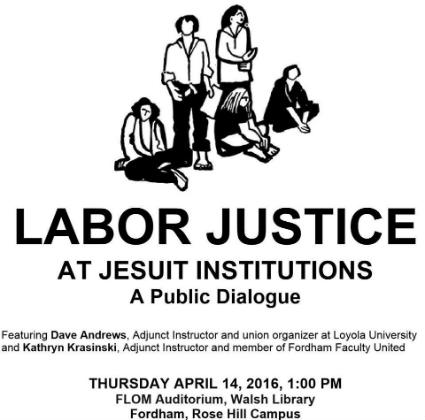 Fordham prides itself on its commitment to social justice and equality. Nevertheless, Fordham adjuncts, food service workers, and others often live below the poverty line while laboring under precarious conditions. Across the country, workers at Jesuit institutions like Loyola University Chicago have been coming together to say "Enough!" How will Fordham respond?

Race Matters at Fordham: A Panel 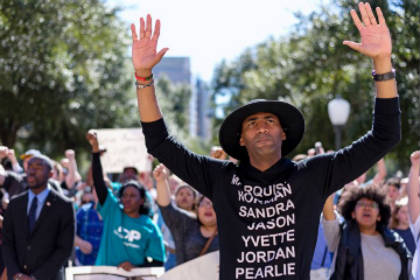 Come to a discussion on race and racial relations at Fordham over the last years. Perspectives from Fordham Alumni: Rachel Jones, Carmela Muzio Dormani and Bobby Cardos. 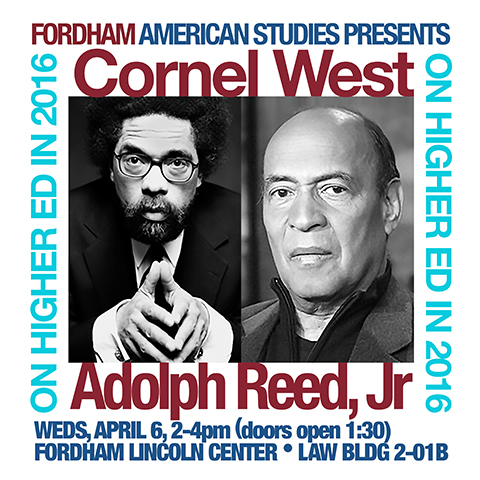 America's system of higher education is in a state of slow-crisis. Rising tuition costs and deep cuts in state funding are leaving many of our students in crippling debt, and many others without access to higher education. Please join our distinguishing guests for a discussion of how these issues may be addressed in the 2016 presidential campaign and beyond.

Admission is free, but registration is required. For additional information, amerstudies@fordham.edu. 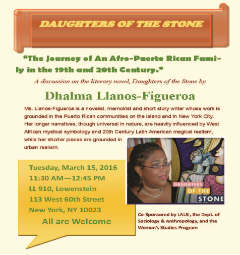 Ms. Llanos-Figueroa is a novelist, memoirist and short story writer whose work is grounded in the Puerto Rican communities on the island and in New York City. Her longer narratives, though universal in nature, are heavily influenced by West African mystical symbology and 20th Century Latin American magical realism, while her shorter pieces are grounded in urban realism.

Sponsored by LALSI, the Department of Sociology and Anthropology and the Women's Studies Program.

From Their Perspective: Out Latina Lesbian Voices

This event is meant to discuss the experiences of Latina Lesbian women and discuss the book mentioned. Panelists include Alicia Anabel Santos and Gina Anderson. The discussion will also be moderated by the editor of Out Latina Lesbian Nivea Castro. Please note: Food will be provided.

Sponsored by the Office of Multicultural Affairs, Office of Career Services and the Department of Sociology and Anthropology. 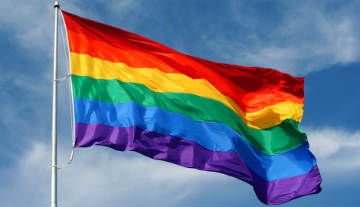 Sponsored by the Departments of Theology and Sociology and Anthropology, the Women's Studies Program, American Studies, the Working Group on Gender and Sexuality, The Faculty Seminar on Gender and Religion.

Islam and Feminism - A Conversation with Professor Zakia Salime 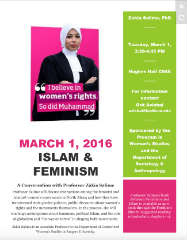 Professor Salime will discuss interactions among the feminist and Islamist women's movements in North Africa and how they have transformed state gender policies, public discourse about women's rights and the movements themselves. In the process, she will challenge assumptions about feminism, political Islam, and the role of globalism and "the war on terror" in shaping both movements.

Sponsored by the Program in Women's Studies and the Department of Sociology and Anthropology. 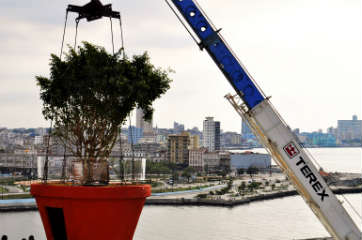 Join us in meeting Cuban artist, Rafael Villares. Villares has produced significant art work in the last several years. His solo exhibitions have appeared at the well-known Havana Biennial Art Exhibition, since 2009, including his monumental work, Reconciliation, Chromatic Storm, and Itinerant Landscape.

Sponsored by LALSI, Art History and the Department of Sociology and Anthropology.

Cura Personalis and the Rights & Dignity of Pregnant People 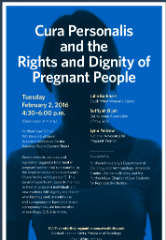 Recent years have borne witness to rhetoric, policies, and legislation that suggest a profound disregard for pregnant women and new mothers and runs counter to the Jesuit principle of cura personalis ("care for the whole person"). This panel of experts will speak directly to the need to defend the rights and dignity of all pregnant people, whether they seek to end a pregnancy or to continue one despite poverty, incarceration, drug use, or another health concern. This event invites people across a spectrum of opinion about reproductive rights and health to unite in the defense of one basic principle: at no point during pregnancy should a person lose their civil or human rights.

Sponsored by the Department of Sociology and Anthropology, Law Students for Reproductive Justice, American Studies and Women's Studies.

Women, The Body and Primitive Accumulation Today - A Discussion with Federici 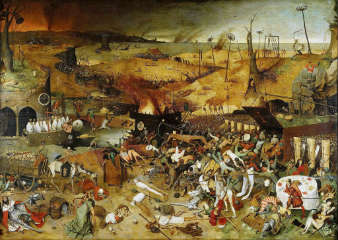 What is the relationship between women, the body, and primitive accumulation? Recounting the history of colonialism and enclosure, Marx argued that primitive accumulation was "written in the annals of mankind in letters of blood and fire." Nevertheless, he perceived the process to be but a prelude to capitalist development. Drawing on her history as an activist in New York's Wages for Housework movement as well as her organizing experiences in Nigeria and elsewhere, Silvia Federici demonstrates that primitive accumulation is in fact an enduring feature of capitalist exploitation, which disproportionately affects women and people of color.

Silvia Federici is an Italian American scholar, teacher, and activist from the radical autonomist feminist Marxist tradition A professor emerita and Teaching Fellow at Hofstra University, she also worked as a teacher in Nigeria for many years. Federici is the co-founder of the Committee for Academic Freedom in Africa, and is a member of the Midnight Notes Collective. Her publications include Caliban and the Witch: Women, The Body & Primitive Accumulation (2004) and Revolution at Point Zero: Housework, Reproduction, and Feminist Struggle (2012).

After the Wrath of God: AIDS, Sexuality, and the American Religion

Sponsored by the Departments of Theology and Sociology and Anthropology, the Women's Studies Program, the Gender, and Sexuality Working Group, the Faculty Seminar on Gender and Religion, and the Graduate Student Association.