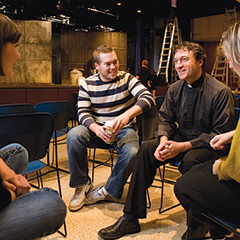 Honors Sacred Texts examines the central role that scripture and its interpretation play in the three great world religions that originated in the Middle East: Judaism, Christianity and Islam. Communities within those religious traditions define themselves, to a great extent, by how they relate to and interpret their sacred texts. Interpretation occurs in the context of particular communities and the meaning of a particular scriptural text varies depending on the community that is interpreting it.

This seminar focuses on a particular theme or set of themes that is found in the scriptures of all three religions. The current theme of the seminar is social justice; students will explore the interplay between the interpretation of scriptures relating to social justice and religious practices of social activism and service. The classroom learning is enhanced by engagement in religious communities in New York City.