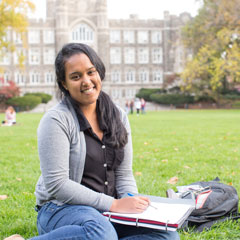 Have questions about our services?

International student advisers are available to answer your questions.

Presidential Orders and Proclamation on Travel and Immigration

The Office for International Services (OIS) is responsible for welcoming and supporting international students scholars, and employees at Fordham University. This page was created to guide the Fordham University community regarding revisions to federal immigration policy. OIS and campus partners will continue to monitor the United States’ evolving immigration rules and will update this page as more information becomes available.

On December 4, 2017, the Supreme Court of the United States issued a decision allowing the latest version of the Trump administration’s travel ban, “Travel Ban 3.0” to be enforced in full. Travel Ban 3.0, implemented in September 24, 2017, restricts travel to the U.S. for individuals from Chad, Iran, Libya, Somalia, Syria and Yemen. Two federal courts had issued injunctions limiting implementation of Travel Ban 3.0 to allow travel to the U.S. from one of the restricted countries when a visitor has close family members living in the U.S.  The Supreme Court overruled the injunctions because two other federal Courts were hearing arguments on the substantive legality of the travel ban. The Justices determined that they expect these decisions on the underlying merits of the travel ban to be appealed and decided by the Supreme Court, possibly even this term.
It should be noted that Travel Ban 3.0 does not affect students or scholars who are presently in the US on a visa or have permanent residency. For full detail on Travel Ban 3.0, please see below.

On Sunday evening, September 24, 2017, President Donald Trump released a Presidential Proclamation Enhancing Vetting Capabilities and Processes for Detecting Attempted Entry Into the United States by Terrorists or Other Public-Safety Threats. This “travel ban” targets eight (8) countries, restricting, and in some cases eliminating, travel by their nationals into the United States. The restrictions affect nationals of Chad, Iran, Libya, North Korea Somalia Venezuela, Yemen and Syria, unless exempt or granted a waiver. US lawful permanent residents, dual nationals, and holders of valid US visas are exempt, among others. Restrictions vary by country and are set forth below. Restrictions took effect immediately for certain nationals of Iran, Libya, Somalia, Syria, and Yemen. Below is a detailed list of those affected.

Travel Restrictions
The country-specific restrictions are as follows:

The proclamation does not impose restrictions on nationals of Iraq, but the Department of Homeland Security has recommended to Customs and Border Protection officials that Iraqi nationals be subject to additional scrutiny. Sudan has also been removed from the list of countries subject to restrictions, though Sudanese nationals remain likely to be subject to heightened scrutiny.

The restrictions will remain in place indefinitely. However, the Department of Homeland Security and Department Of State will review the restrictions every 180 days and will make recommendations to the President concerning whether the Administration should continue, modify, terminate or supplement the restrictions, and whether other countries should be added.

Who Is Subject to the Restrictions
The suspensions and limitations on entry apply to nationals of the named countries who:

Exemptions
The proclamation exempts the following groups from the restrictions:

Waivers
Waivers will be available on a case-by- case basis, not granted categorically, subject to forthcoming guidelines from the Departments of State and Homeland Security. To be eligible for a waiver, a foreign national must demonstrate that denying entry would cause undue hardship, entry would not pose a threat to U.S. national security or public safety and entry is in U.S. national interest. The proclamation also lists several groups for whom a waiver may appropriate:

For more information regarding the decision process for creating the restrictions please see the White House’s Fact Sheet on Proclamation on Enhancing Vetting Capabilities and Processes for Detecting Attempted Entry Into the United States by Terrorists or Other Public- Safety Threats.

If you have any questions about September 24, 2017 Proclamation, please contact the Office for International Service (OIS).

The University will continue to protect the privacy of student information and records from unauthorized or unlawful intrusion. While Fordham representatives will comply with lawfully issued subpoenas and warrants, it is neither the University’s practice nor expectation to function as an agent of the federal government regarding enforcement of federal immigration laws.

Catholic Charities also has many services for immigrants.

On February 3, 2017, a federal judge in Washington State issued a restraining order, which temporarily blocked the government from enforcing the executive order’s ban on travel to the United States. The government appealed the ruling to the Court of Appeals for the 9th Circuit.

On February 9, 2017, the Court of Appeals for the 9th Circuit unanimously rejected the government’s motion to stay the temporary restraining order, refusing to reinstate the executive order travel ban. The government will likely appeal the decision to the Supreme Court. Learn more:

Because the situation remains very fluid, we continue to recommend that citizens from the seven countries affected by the ban who are currently in the United States avoid travel abroad, as it may result in their inability to return to the United States. For example, the United States Supreme Court could hear the case and reverse the suspension of the ban, or President Trump could issue another, perhaps more legally defensible, executive order on immigration that would likewise restrict entry into the United States.

On March 6, 2017, a new Executive Order was issued that revokes and replaces the one issued on January 27, 2017. See details below.

The Executive Order revokes and replaces Executive Order 13769, issued on January 27, 2017. The Executive Order only applies to people from six countries without current visas. It suspends, for 90 days, entry to the United States for visitors, students, and workers without current non-immigrant visas from the following six countries: Iran, Libya, Somalia, Sudan, Syria, and Yemen. The ban also applies to people, from these six countries, newly arriving on immigrant visas (which are issued based on employment or family status). Iraqi nationals seeking immigration will be allowed entry but will be subject to additional scrutiny.

The Executive Order also suspends entry of all refugees (irrespective of their country) to the United States for 120 days.

A copy of the Executive Order can be found here: https://www.whitehouse.gov/the-press-office/2017/03/06/executive-order-protecting-nation-foreign-terrorist-entry-united-states

On March 15, 2017, the U.S. District Court in Hawaii issued a nationwide temporary restraining order, preventing the government from enforcing the March 6, 2017 Executive Order's entry ban that was scheduled to go into effect on March 16, 2017.

On March 16, 2017, the U.S. District Court in Maryland issued a nationwide preliminary injunction, preventing the government from enforcing the March 6, 2017 Executive Order 90-day entry ban, which had been scheduled to go into effect on March 16, 2017.

On June 26, 2017, the U.S. Supreme Court ruled that limited parts of the March 6, 2017 Presidential Executive Order (EO) travel ban will take effect until October, when the Court agreed to hear the administration’s challenged to the federal court cases that have stayed the full implementation of the EO. This ruling should not affect students, scholars, and employees from the six countries impacted by the travel ban with a “bona fide” relationship with a U.S. university.

Students who have been admitted to a U.S. school (e.g., F-1 or J-1 student)
Workers who accept an offer of employment from a U.S. employer (e.g., H-1B)
Lecturers invited to address an American audience (e.g. J1 professors and researchers)