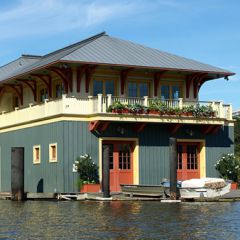 Located on the Harlem River in Upper Manhattan at Swindler Cove Park the Peter Jay Sharp Boathouse is just two miles from the Fordham Rose Hill Campus. It is the first community boathouse built in New York in over 100 years and is home to the Fordham University Rowing Program.

The boathouse itself floats just south of the University Heights Bridge. The idea of this boathouse came into being in the mid 1990’s when Bette Midler returned to New York City and saw crews practicing on the Harlem River. Realizing that there was a lack of interest in the sport, an idea began to blossom. The boathouse was designed by Robert A.M. Stern Architects. The construction, by Foglietta & Son, began in 2003 and continued into 2004 in Norwalk, CT. After completion in mid-2004, the Peter Jay Sharp Boathouse was then floated from Connecticut down around Manhattan and finally into its resting place at Swindler Cove Park. Several clubs share the boathouse with Fordham including: Row New York and Manhattan College Rowing.