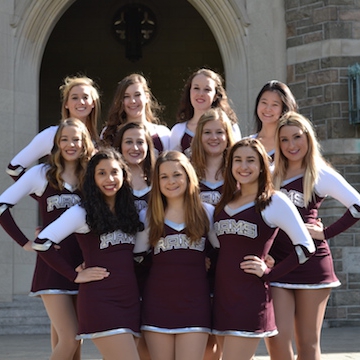 Fordham Dance Team (FDT) is one of two spirit groups at Fordham University. They are actively involved with Fordham Athletics and work alongside Fordham Cheerleading. Fordham Dance performs at home football games. In addition to football games, the dance team cheers at all home men's and women's basketball games, as well as performs at media timeouts and halftime. They also participate in other athletic events such as Under the Tent at Homecoming and Ram Town, the annual Fordham Basketball pep rally. In December 2013, FDT traveled with Men's Basketball to Madison Square Garden to cheer and perform on behalf of Fordham! Also, in March 2014, a few team members traveled to Waco, Texas to cheer on the Women's Basketball team at the NCAA tournament!

The team loves supporting community events. They have participated and performed at fundraisers such as Making Strides Against Breast Cancer, Light It Up Blue: Autism Awareness, and Relay for Life. Fordham Dance also represents Fordham at other events in the city such as Collegiate Week on Good Morning America.

The team practices at least three times a week and does cardio training as well. Fordham Dance attends UDA Camp during the summer to prepare for the season. FDT moves in early in the Fall for a rigorous boot camp to jump-start the year. They mostly perform Jazz, Pom, Hip Hop, and sideline routines.

We look forward to seeing you at a Fordham game!

Questions? Email us at dance@fordham.edu.