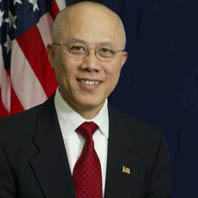 Mok served as the CFO of the U.S. Department of Labor from January 2001 to May 2007. He was confirmed by the U.S. Senate in January 2002 after being nominated to the position by President George W. Bush. He previously served as CFO and comptroller of the U.S. Department of the Treasury, appointed by former Treasury Secretary James Baker. Mok was one of the highest-ranking Asian Americans in George W. Bush’s administration and is regarded as a leader of the Chinese-American community.

Prior to his appointment at the Labor Department, Mok focused his work on Condor Consulting, the international business advisory firm that he established in collaboration with retired U.S. Sen. Birch Bayh, Democrat of Indiana. Through Condor, Mok was an adviser to numerous U.S.-based multinational companies on China market-entrance strategies. He also provided strategic business information and facilitated the development of key relationships between his clients and senior Asian embassy officials in Washington, D.C. In addition to advising U.S.-based businesses, Mok was frequently called upon to advise Asia-based clients on U.S. market entrance and business partnership strategies.

Mok’s professional career spans the U.S. private and public sectors. He began his private-sector career as an auditor with Main & Hurdman, now KPMG Peat Marwick, and later as a senior auditor with Parnell Kerr & Forster. In 1971, he was called to active military duty. As a commissioned officer of U.S. Army, he served in Okinawa, Japan, as a strategic intelligence officer overseeing reporting and analysis on China, Vietnam, and North Korea. He also served as an Army adviser in Army Readiness Region 1 at the U.S. Military Academy at West Point.

In 1976, Mok resigned his Army commission and re-entered the private sector as the director of accounting at Time-Life Books. In 1982, he joined U.S. News & World Report, where he served first as controller and later as the corporate treasurer. In 1986, he returned to public service as a Foreign Service officer of the U.S. Department of State, Bureau of East Asian and Pacific Affairs. Following his tenure at the State Department, Mok joined the management team of the U.S. Department of the Treasury as the comptroller and later was appointed as the Treasury’s first chief financial officer. During his six-year tenure at the Treasury, Mok was also appointed by then-President George H.W. Bush to serve on the National Advisory Council on the Public Service.

In 2008, Mok served as an executive member of a management review team that assessed and documented the management structure and process of the U.S. Agency for International Development and the Farm Service Agency within the U.S. Department of Agriculture. The assessment and documentation of key management processes covered the offices of the CFO, CIO, HR, procurement, and other significant areas. Mok also assisted the National Academy of Public Administration when it was asked by the U.S. Congress to assess the financial management process of the U.S. Federal Court System. While serving as the Labor Department CFO, Mok was the selection official of a more than $40 million enterprise-wide financial system procurement.

In 2006, Mok received the prestigious Donald L. Scantlebury Memorial Award for Distinguished Leadership in Financial Management Improvement. He was named as the “Fed 100” by Federal Computer Week and was the recipient of the Association of Government Accountants Washington, D.C., Chapter’s Einhorn/Gary Award. In 2005, he received the AGA Distinguished National Leadership Award. In 2011, AGA honored Mok with the Robert W. King Memorial Award, its highest honor. Mok served on the Republic of the Marshall Islands Trust Fund Committee and the General Administration Board of the U.S. Department of Agriculture Graduate School. He was elected as a Fellow of the National Academy of Public Administration in 2005 and serves on the Government Accountability Office Advisory Council on Government Audit Standards. He was the vice chairman of the board of trustees for the Academy for Government Accountability and is a 2006 Distinguished Practitioner in Residence at the University of Kentucky Martin School of Public Policy and Administration. Mok is also the recipient of the 2007 Ellis Island Medal of Honor. In 2008, he became the national president of the Association of Government Accountants.

He received his BS in accounting from Fordham University in New York and his MA in accounting from Catholic University in Washington, D.C. He also graduated from the U.S. Foreign Service Institute in Rosslyn, Va., and from the U.S. Army Institute of Administration at Fort Benjamin Harrison in Indiana. Born in Shanghai, China, and raised in Hong Kong, Mok speaks fluent Mandarin Chinese and Cantonese.

Mok and his wife, Nancy, reside in the suburbs of Washington, D.C. They are the proud parents of two grown children, both attorneys, and six grandchildren.