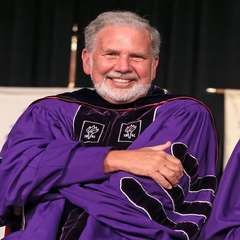 “I had the good fortune of studying at Fordham, first as an undergraduate for my BA and then in the Theology Department for my PhD - and to do so during and after the Vatican Council. It is fair to say that those studies shaped in me (and, I should add, in others who were my peers) a view of the world and of human possibility that has been the foundation of my intellectual and professional life. Some might not see immediately the connection between that foundation and my life at NYU and its Law School; but, from the beginning, I have been explicit in tracing my ideas to those years. I owe both the Department and the University both gratitude and affection."

John Sexton, the fifteenth president of New York University, also is the Benjamin Butler Professor of Law and NYU Law School's Dean Emeritus, having served as Dean for 14 years. He joined the Law School's faculty in 1981, was named the School's Dean in 1988, and was designated the University’s President in 2001.

He holds honorary degrees from Fordham University, Saint Francis College, Saint John’s University, University of Rochester, and Katholieke Universiteit Leuven. The student editors of NYU’s Annual Survey of American Law dedicated their Volume 60 in his honor. He was named by Emory University “Outstanding High School Debate Coach of the Last 50 Years” for work he did from 1960-1975. He has been honored at the Harvard Law Review Annual Banquet, and has been named “Alumnus of the Year” both at Fordham and at his high school, Brooklyn Prep. In July 2008 he was named a Chevalier de la Légion ď Honneur, the national order of the Legion of Honor of France.

Before coming to NYU, President Sexton served as Law Clerk to Chief Justice Warren Burger of the United States Supreme Court (1980-1981), and to Judges David Bazelon and Harold Leventhal of the United States Court of Appeals (1979-1980). For ten years (1983-1993), he served as Special Master Supervising Pretrial Proceedings in the Love Canal Litigation. From 1966-1975, he was a Professor of Religion at Saint Francis College in Brooklyn, where he was Department Chair from 1970-1975.