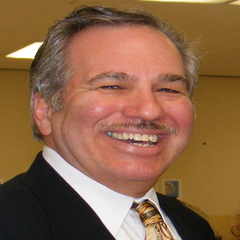 “When I enrolled for the doctorate, Fordham was the only Catholic university that coupled theology with the comparative study of religions.  This openness to interdisciplinary research enabled me to introduce insights from social science and history into my understanding of the Church and its theologies.  Without the benefit of my years as a student at Rose Hill, I would not have achieved the intellectual vision of religion as a creative exploration of faith in the social process.”

Rev. Anthony M. Stevens-Arroyo, C.P. is an American scholar of religion and retired Brooklyn College professor emeritus, and Roman Catholic priest of the Passionist Order. At Brooklyn College, starting in 1980, he authored and/or edited a dozen books and wrote more than 100 scholarly articles, book chapters and reviews for leading quarterlies in the United States, Latin America and Spain.

Stevens-Arroyo co-founded (1992) and was first President (1995–97) of the Program for the Analysis of Religion Among Latinos, known as PARAL, which published a four book series on various aspects of Latino religious experience in the United States for which Stevens-Arroyo was the editor in chief as a resident scholar at Princeton University. In October 2008, he was awarded the Luzbetack Award for Exemplary Church Research, from Georgetown University's Center for Applied Research in the Apostolate (CARA)

Stevens-Arroyo was appointed by the National Council of Churches to a commission reporting on religion in Cuba in 1976-77, and later named Director of the Hispanic Project for the Theology in the Americas in a program sponsored through the National Council of Churches. His history of Latino people of faith was published in 1980 by Orbis Press as Prophets Denied Honor: An Anthology on the Hispano Church in the United States; later designated as one of 15 outstanding English language books of 1980 by the editors of the International Bulletin of Missionary Research (London, UK). In 1987, Prophets Denied Honor was selected as a "Landmark of Catholic Literature in the 20th Century" by Philip Gleason in Keeping the Faith: American Catholicism, Past and Present (1987)

Stevens-Arroyo testified to the United Nations' Committee for Trusteeship and Decolonization Committee hearings on Puerto Rico in September 1982. On June 25, 1990, he addressed the Sub-Committee on Insular and International Affairs of the U.S. House of Representatives, concerning legislation authorizing a plebiscite for Puerto Rico. He returned to serving the United States Civil Rights Commission's Advisory Committee for Pennsylvania. Retired as Professor Emeritus of Puerto Rican and Latino Studies at Brooklyn College, he currently resides in Stroudsburg, Pennsylvania