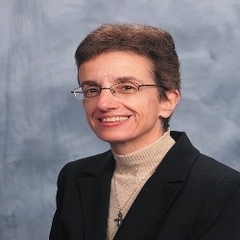 “I did receive an excellent education in Theology at Fordham from an outstanding faculty, many of whom have retired or gone on to eternal life.   I can say that, upon graduation, I felt well-prepared to embark on a theological career, both as a teacher and scholar.  The many papers I wrote for my graduate classes enabled me to hone the discipline of research and writing.   I am grateful to Fordham for a formative education in theology. “

Ilia Delio is a Franciscan Sister of Washington, DC and holds the Josephine C. Connelly Endowed Chair in Theology at Villanova University.  A native of Newark, NJ, she earned doctorates in pharmacology from Rutgers University-School of Healthcare and Biomedical Sciences and in Historical theology from Fordham University, NY.  She is the recipient of a Templeton Course in Science and Religion award and the author of seventeen books including The Unbearable Wholeness of Being which won the 2014 Silver Nautilus Award and a Catholic Press Association Book Award.  Other books include Care for Creation (Catholic Press Book Award 2010), The Emergent Christ (Catholic Press Book Award 2013) and Making All Things New : Catholicity, Cosmology and Consciousness nominated for the 2018 Grawemeyer award.  Her books have been translated into Italian, Spanish, Portuguese, Polish and German.  In 2015 she became general editor of a new book series by Orbis Books called “Catholicity in an Evolving Universe” of which there are currently ten books scheduled for publication.  She lectures nationally and internationally on topics including evolution, artificial intelligence, consciousness, culture and religion.

Dr. Delio’s work in Science and Religion is influenced by the Jesuit scientist, Pierre Teilhard de Chardin (1881-1955) who devoted his spiritual writing to bridging Christianity and evolution.   Like Teilhard, she sees the essential need to integrate Science and Religion toward a new way of thinking, consonant with evolution.  Her research interests focus on exploring divine action in a world of evolution, complexity, emergence, quantum reality and artificial intelligence.   She continues to lecture and write on religion and evolution, catholicity, cosmology and culture, artificial intelligence and human becoming.  Her work has  a wide public audience and can be found on the website:  www.omegacenter.info.