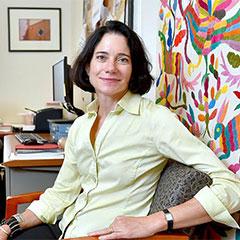 My scholarship dwells in zones of contact between Native peoples and settler colonists as they forged new visual cultures in the Americas. I have been particularly interested in the social construction of space and its imaginary, which was the subject of my first book, The Mapping of New Spain (Chicago, 1996). My most recent book, The Death of Aztec Tenochtitlan, the Life of Mexico City (Texas, 2015), draws on Indigenous texts and representations to counter a colonialist historiography and to argue for the city’s nature as an Indigenous city through the sixteenth century. My scholarship spans both digital and traditional formats. With Dana Leibsohn, I am the creator of Vistas: Visual Culture in Spanish America, 1520-1820 (www.fordham.edu/vistas).

I currently serve as a Senior Fellow of Pre-Columbian Studies at Dumbarton Oaks, on the editorial boards of Latin American and Latinx Visual Culture, Estudios de cultura náhuatl, and Fordham University Press.

The Death of Aztec Tenochtitlan, the Life of Mexico City. Austin: University of Texas Press, 2015.Winner of the 2015 Arvey Prize from the Association of Latin American Art for the year's best book on Latin American art history.

"Pictography, Writing, and Mapping in the Valley of Mexico and the Beinecke Map," and "Crown and Tlatoque:  The Iconography of Rulership in the Beinecke Map," in Painting a Map of Sixteenth-Century Mexico City: Land, Writing and Native Rule, co-edited with Mary Miller (New Haven and London: Yale University Press/Beinecke Library, 2012).

"The Images of Eighteenth-Century Urban Reform in Mexico City and the Plan of José Antonio Alzate," Colonial Latin American Review 21, no. 1 (April 2012), pp. 45-75.

The Mapping of New Spain: Indigenous Cartography and the Maps of the Relaciones Geográficas.  Chicago and London: University of Chicago Press, 1996.  Winner of the 1996 Nebenzahl Prize in the History of Cartography.  Paperback edition, 2000.