About Our Ignatian Heritage

A Very Brief Sketch of Ignatius of Loyola 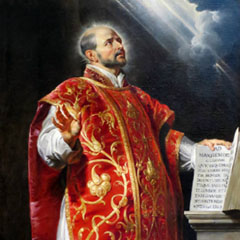 Íñigo López de Loyola (1491-1556) was born into an aristocratic family in the Basque region of Northern Spain. As a vain young man, he was captivated by military prowess, honor, chivalry, and the pursuit of material wealth. Known to brawl and sword fight (usually after a night of drinking), the hot-headed Íñigo was no stranger to sexual conquest as he worked to arrange a cozy life of pleasure, privilege, and power. When he was 24, a criminal charge of "nocturnal misdemeanors" was on his police record which landed him and his brother, Pedro, in prison. In short, Íñigo was an experienced sinner before an inexperienced saint.

An unexpected shift quickly occurred. While fighting as a military officer against the French in the Battle at Pamplona in 1521, a cannonball shattered Íñigo's right knee and severely wounded his left. In two seconds, these two injuries marked the beginning of two subsequent realities: a noticeable lifelong limp for the vain courtier, and a huge roadblock in his executive fast track strategy. After a long and painful year of convalescence, sheer boredom (remember, there was no Internet), and troubling spiritual doubts and awakenings, Íñigo did some soul searching by way of critical self-inventory and prayer. And it profoundly affected him psychologically, socially, ethically, and spiritually.

Íñigo was indeed changing and decided that he simply could not keep living as planned. His body was healing, but his soul was starving. The soldier surrendered and recast himself as a different type of warrior - a scrappy soldier for Christ. He would take the name of Ignatius (presumably given his devotion to Igna

tius of Antioch) and begin a lifelong labor of love in which he, along with his college roommates Francis Xavier and Peter Faber, would build one of the world's largest and most respected religious orders and educational philosophies called Jesuit. It would have one simple yet challenging goal: transforming one soul at a time. This Jesuit care of the whole person (body, mind, spirit) educational approach continues to shape millions of students throughout the centuries.

In addition, Ignatius' best known spiritual legacy is the workbook he wrote called The Spiritual Exercises in which meditation, prayer, and imagination guide one along the path of transformation through the lens of faith and engaged questioning.

Throughout his life, Ignatius continued to wrestle with fears, doubts, and desires. He worked to unpack his faith, the world, and the God he served. He worked to hone skills of patience, critical scrutiny, and gratitude, and by uniting in word and deed what he truly desired - to see God in all things. Ignatius' faith journey was arduous, not effortless or instantaneous. And so like all things meaningful, Ignatius' own story teaches us that we also need quality time to question, tackle, doubt, discern, absorb, and energize as we examine our daily self and ambitions. May your freshman year at Fordham College at Rose Hill serve as the important foundation for this transforming journey.