Eleven members of the Manresa Community began Urban Immersion on the first day of Spring Break by watching the documentary Park Avenue, about the divide between the wealthy, particularly those involved in finance and business who reside at 740 Park Avenue (on the Upper East Side), and the poor who live on Park Avenue to the North (in Harlem and the South Bronx). 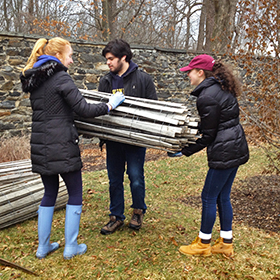 After spending the night at Loyola Hall, we saw the Holocaust exhibit at the United Nations before visiting residents at the Mary Manning Walsh Nursing Home. The Jesuits at 14th Street hosted us for dinner and encouraged us to keep our spirits high. The next day, we served the hungry at the St. Francis Xavier Soup Kitchen, met with a Lutheran Minister who is involved in immigration reform, and attended Mass at the Church of St. Jean Baptiste.

On the final day of the program, we met with members of the community at Covenant House, a shelter for homeless youth ages 18-20, before dinner and a reflection guided by members of the NYC Jesuit Volunteer Corps.

It was awesome to be part of the group of Manresa Scholars and staff who were transformed by the project. I gained insight into simple living, learned about business-driven and government interests, and practiced Jesus' calling to meet people where they are.

We embraced living simply with only necessities. These practices helped us learn about and remain in solidarity with the New Yorkers we served.