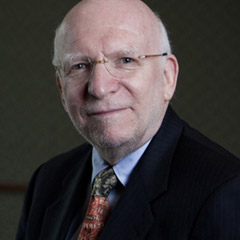 Frank Werner, an associate professor of finance and business economics, has a long academic career that precedes his joining the Gabelli School of Business in 1977. He is deeply involved in course design for the integrated core curriculum at Fordham's undergraduate Gabelli School, where he helped to create The Ground Floor, the anchor business course for freshmen. He also works as a corporate advisor and consultant.

Prior to joining Fordham, Dr. Werner taught in the management department at the Polytechnic Institute of New York, in the economics department at Rutgers College and in the accounting department at Baruch College of the City University of New York. He has been an adjunct associate professor at Columbia Business School, where he taught in the MBA program and the master's degree program for executives. Before entering academia, Dr. Werner worked for the Grumman Corporation as a senior contracts administrator on the lunar module program and as assistant to the financial vice president of Grumman's data-systems subsidiary.

At Fordham, Dr. Werner has been associate dean of the graduate division and director of the MBA program at the Tarrytown campus. He has served as area chair of three departments: finance, information and communications systems, and quantitative methods, the latter of which has since been subsumed under the management area. He also was director of the Gabelli School's honors thesis program.

Dr. Werner was the graduate division's first recipient of the Gladys and Henry Crown Award for Faculty Excellence in 1985; he won it again in 2004 and 2010. Graduate students selected him to receive the 2008 Stanley Fuchs Award for his impact on and commitment to the student body, and he won the Gabelli School's Teacher of the Year Award in 1986. For the 1993-1994 academic year, he held the James A.F. Stoner Chair in Quality Leadership.

In addition to his responsibilities at Fordham, Dr. Werner advises companies in the areas of corporate finance and quality management. He has worked extensively with financial institutions and airline executives and has given seminars on finance and quality-management topics. Dr. Werner has lectured in English and Spanish throughout North, Central and South America, as well as in Europe, Asia, Africa, the Middle East and the Caribbean. He is quoted regularly in the media, especially regarding developments in airline finance and management.

In fall 2013, Dr. Werner was elected to a three-year term on the board of directors of the Academy of Business Education. He supports the academy in its three-part mission: to enhance the teaching of business education and improve the learning environment through educational research, curriculum development and creative pedagogy; to foster interdisciplinary interaction through multidisciplinary meetings and programs, and to encourage and support faculty development.