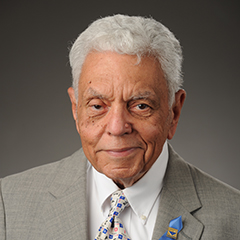 The guiding principle: Bonded atoms and unshared pairs of electrons about a central atom are as far from one another as possible.

Pauling introduced the idea of hybridization of C-H bonds in methane in 1930 to provide a quantum chemical explanation of the long known fact that its four C-H bonds are equivalent.

Henry Bent reviewed this topic in detail in Chemical Reviews in 1960 and wrote a parallel article in J Chemical Education advocating its teaching. From 1960 onward most Organic textbooks have adopted Bent’s idea. However, the discussion in chemistry courses is based on predicting C-H hybridization rather than measuring it experimentally.

Ethane, ethylene and acetylene are the common textbook examples of molecules with sp3, sp2 and sp hybridization respectively, but as gases, they are impractical for use in undergraduate lab experiments.

4-t-Butylphenylacetylene [C12H14], a readily available liquid with all three types of C-H hybridization, is suitable for experiments to show the relation of 1JCH coupling constants to C-H hybridization. Also it has quaternary C atoms, i.e. with no Hs attached.

The 9 H atoms of the t-butyl group are equivalent and have a chemical shift at 1.30 ppm. The 4 phenyl ring H atoms form two equivalent sets and show signals at 7.33 and 7.43 ppm while the single ethynyl H has a signal at 3.01 ppm. The solvent here is CDCl3. 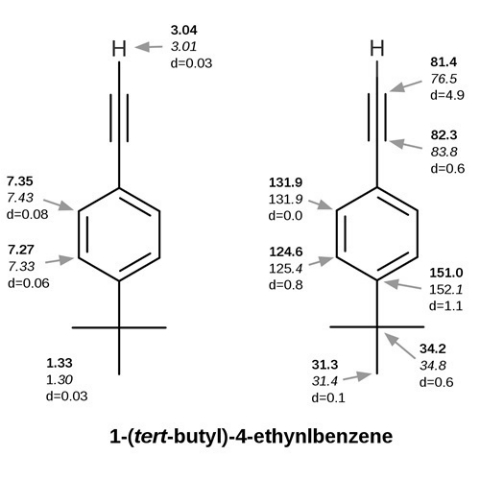 When the solvent is changed from CDCl3 to DMSOd6 the delta value for the ethynyl H increases from 3.01 to 4.10 ppm, indicating that it is H bonded to the solvent DMSO. In C6D6 this H appears at 2.76 ppm which is a closer to the value of 2.63 ppm, calculated using Gaussian, for the gas phase. Thus CDCl3 is not simply a spectator solvent.

These 1JCH coupling constants are very little affected by changes in solvent. Accordingly, values calculated in the gas phase more closely agree with experiment than do the calculated chemical shifts using Gaussian. 2JCH and 3JCH are much smaller than 1JCH and generally 10 Hz or less. However, 2JCH for the ethynyl C is ~ 50 Hz.

Theory tells us 1JCH = 6.51 x [1JCD] This factor is the ratio of their gyromagnetic constants. It can be derived experimentally by running the 1H coupled 13C spectrum of C6H6 added to C6D6. Extensive tables of 1JCD of common NMR solvents are widely available. These can be used to show that electronegative elements cause fractional hybridization of C-H bonds.

Similarly, the statement that C in CHCl3 is sp3 hybridized because it is tetrahedral contradicts the chemical properties of this molecule. The proper question is what is the hybridization of the C-H bond in CHCl3.

As an addendum: the hybridisation of the carbon orbital used to form the C–H bond can be related to the one-bond C–H coupling constant in NMR. The larger the s-character, the larger the coupling constant; and Gunther's NMR Spectroscopy (3rd ed., p 424) states that for hydrocarbons an empirical correlation has been found: