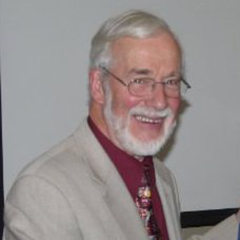 I am interested in the structural characterization of inorganic coordination compounds by single crystal X-ray crystallography. In addition, my students and I seek to prepare new self-assembled inorganic polymers, to investigate their properties and crystal structures, and to relate their structures with their physical properties.

Recent work in our laboratory has focused on attempts to characterize neutral mixed-valence copper cyanide complexes, where the divalent copper (Cu(II)) atoms are coordinated with bi- or tridentate bases to stabilize against reduction by cyanide. In these compounds, the Cu(II) atoms are usually 5-coordinate, with two to four sites occupied by base donor atoms and one to three by CN groups; the Cu(I) atoms coordinate two to four CN groups, and the CN groups link the copper atoms into networks. We have succeeded in preparing and characterizing 25-30 new compounds in the past few years. The compounds do indeed include several of the desired mixed-valence copper cyanide polymers, but we have also prepared incidentally several mixed valence monomers, and network polymers containing Cu(I) only. 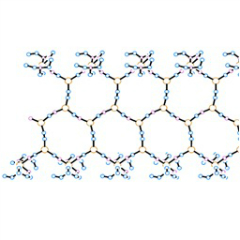 For example, the base N,N-diethylethylenediamine, et 2 en, can form either of two compounds: the mixed-valence 1D polymer, Cu(et2en)2. Cu2(CN)3, with the triple-chain structure shown, with Cu(I) and Cu(II) atoms linked by CN groups alternating along the outer chains and a central chain consisting of CN linked Cu(I) atoms; or the mixed valence compound Cuet2en. Cu(CN)3, in which Cu(II) is coordinated by only one et2en base molecule and by three CN groups, in a 2D polymeric structure.

The base N-methylethanolamine, meoen, forms two different 3D polymeric compounds: Cu(meoen)2. Cu3(CN)5, and [meoenH]. Cu2(CN)3, both of which crystallize in complex 3D polymeric structures built from Cu atoms and CN groups, with the former structure containing both Cu(I) and Cu(II) atoms, while the latter network contains only Cu(I) atoms, with charge neutrality preserved by inclusion of protonated meoen molecules in cavities in the 3D framework. 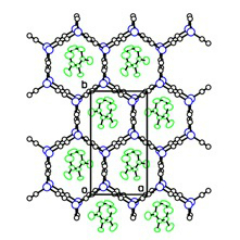 Reactions involving the base N,N’-dimethylpropylenediamine led to a surprising result. The structure is made up of a 2D Cu2(CN)3- network, with cyclic guanidinium cations in channels in the structure, evidently formed during our synthesis by the unexpected reaction:

Not all syntheses give the desired product!