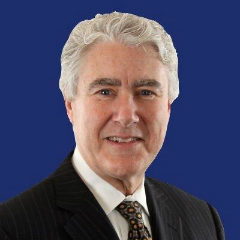 Douglas A. Cooper has significant trial experience in both state and federal court and has argued appeals before the New York Court of Appeals and the U.S. Second Circuit Court of Appeals.  He has led several high-profile matters for the firm, notably the landmark sale in 2005 of the private bus lines in New York City to the Metropolitan Transportation Authority, which itself spawned federal and state litigation.  He serves as a director of a public REIT.  Douglas has lectured extensively on the subject of crisis management.

A senior partner at Ruskin Moscou Faltischek, P.C., he is co-chair of the International Practice Group and a member of the Litigation Department and the Construction Law Practice Group.  He has served as counsel and trusted advisor to many of the firm's key clients, including a major credit union, a public real estate investment trust, builders and real estate developers, a global retail company and numerous Long Island based businesses.

He was named a co-managing partner of the firm in 2002, a position he held until 2010 when he assumed the chair of the Litigation Department.

A member of the Chairman's Council of the New York Historical Society, he also is a member of the board of AF-PCFF (American Friends-Parents Circle Families Forum), which works to foster reconciliation among Israelis and Palestinians.  Douglas graduated from Hamilton College, studied at the School of Political Studies at the Sorbonne in Paris, and received his J.D. Degree from Fordham Law School where he served on the Urban Law Journal.  He also earned a master's degree in corporate law from NYU Law School.