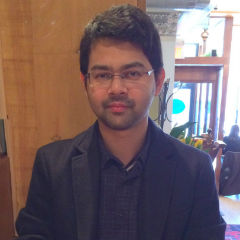 Muhammad U. Faruque is the George Ames Postdoctoral Fellow at Fordham University. Dr. Faruque received his BSc in Financial Economics from the University of London in 2011. After his graduation, motivated by an increasing awareness of the necessity of learning primary languages well enough to deal with classical Islamic texts, he travelled to Iran to explore the Islamic intellectual tradition in depth. He learned Persian in six months and merited entrance to the MA program in Islamic philosophy at Tehran University (the entire MA program is taught in Persian, based on reading original Arabic texts) where he completed his dissertation (Jun 2014) on Mullā Ṣadrā’s and Dāwūd al-Qayṣarī’s metaphysics, with particular emphasis on their treatment of “Absolute Being.” He received his PhD in Islamic thought, philosophy and mysticism from UC Berkeley, and spent a year as an Exchange Scholar at Harvard University’s Divinity School. He is the recipient of numerous awards including the Berkeley Fellowship for Graduate Study.

Dr. Faruque’s forthcoming book, Sculpting the Self: Islam, Selfhood and Human Flourishing, addresses “what it means to be human” in a secular, post-Enlightenment world by exploring notions of self and subjectivity in the thought of Islamic thinkers from Iran and South Asia.

His research focuses on Islamic intellectual practices and their relevance to broader contemporary issues in the study of religion, philosophy and theology, and science and culture. His publications, covering a wide range of topics in subjectivity research, Islamic philosophy and theology, continental philosophy, Sufism, and gender studies, have appeared in such journals as Philosophy East and West, Arabic Sciences and Philosophy (Cambridge), Brill Journal of Sufi Studies, Religion Compass(Wiley), Ancient Philosophy, Islam and Christian–Muslim Relations, European Journal of Social Sciences, and Indian Journal of Economics and Business. He teaches courses on modern and contemporary Islam, classical Islamic humanities, Islamic philosophy and mysticism, as well as on religion and selfhood.

Sculpting the Self: Islam, Selfhood and Human Flourishing, forthcoming.

“The New Science of the Self: Islam, Psychology, and the Rise of Self-help Literature,” in progress.

“A Nietzschean Mystic: Muhammad Iqbal on the Ethics of Selfhood.” In Mysticism and Ethics in Islam, edited by Bilal Orfali et al. Beirut: The American University of Beirut Press, completed and forthcoming.

“What is Life in the Islamic Tradition?” In The Concept of Life in Judaism, Christianity and Islam, edited by Georges Tamer. Berlin: De Gruyter, forthcoming.