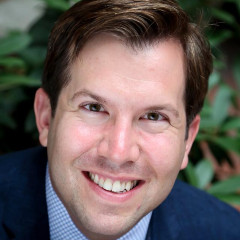 Special Faculty Advisor to the Provost for Strategic Planning

Hornbeck received his DPhil in Theology/Ecclesiastical History from the University of Oxford; he also earned his master’s at Oxford, where he was Senior Scholar of Christ Church and a Jack Kent Cooke Foundation Graduate Scholar. Previously, he was valedictorian of Georgetown College, Georgetown University, graduating with degrees in theology and medieval studies. He grew up in Phoenix, Arizona and resides with his husband in the Riverdale section of the Bronx.

Hornbeck’s scholarly work focuses on the interplay between the shifting categories of “heresy” and “orthodoxy” in medieval and early modern Christianity; on affiliation, identity, and on issues of marginalization in contemporary Roman Catholicism; and on the contested relationship between religion and law in the U.S.

Much of Hornbeck’s early scholarship concerned the “Lollard” or “Wycliffite” movement, which represented the most serious challenge to the authority of the church in late medieval England.

He has also applied his interests in the categories of heresy and dissent to the area of marginalized practices and identities in contemporary American Roman Catholicism. In this area, he has studied "deconversion" among Roman Catholics; described the experience of lesbian, gay, bisexual, and transgender persons in and around the Catholic Church; and commented extensively on Catholic matters in the media.

Returning to the late medieval and early modern periods that are his intellectual home, Hornbeck’s most recent book was Remembering Wolsey: A History of Representations and Commemorations (Fordham University Press, 2019), in which he surveyed portrayals of the English cardinal Thomas Wolsey, who served as lord chancellor and archbishop of York under Henry VIII, in historical writing, works of literature and drama, film, and art.

Hornbeck is presently pursuing various strands of research concerning the relationship between religion and law in the contemporary U.S., including articles on the legal implications of the sexual abuse crisis in the Roman Catholic Church and a larger project on the legal and theological arguments about religious exemptions from generally applicable laws.

What Is a Lollard? Dissent and Belief in Late Medieval England (Oxford University Press, 2010).

More than a Monologue: Sexual Diversity and the Catholic Church, ed., with Christine Firer Hinze and Michael A. Norko, 2 vols. (Fordham University Press, 2014).

A Companion to Lollardy, with Mishtooni Bose and Fiona Somerset (Brill, 2016).

“Did the Supreme Court Just Make Me a Minister?” The American Prospect, July 9, 2020

“Own Your Heresy,” in Andrew Albin, Mary Erler, et al., eds., Whose Middle Ages? Teachable Moments for an Ill-Used Past (Fordham University Press, 2019)