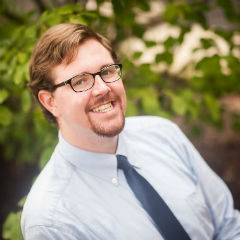 Tim is a doctoral candidate with training in the fields of American Religion, Catholic Social Teaching, Christian history since the late-medieval period, and religious art and aesthetics. His research focuses on the cultural history of Roman Catholics in the United States. His dissertation is titled “A Question Making Time: Corita Kent, the White Catholic Imagination, and American Catholicism.” It traces the career of the Pop artist and longtime Catholic nun, Corita Kent (1918-1986), analyzing her artwork, teaching, and social activism to show how one significant Catholic forged an international reputation and a new spirituality by synthesizing cultural resources from white American Catholic social location after World War II, post-Vatican II reform in Roman Catholicism more broadly, and the 1960s counterculture.
Beyond his dissertation, Tim’s research has focused on subjects within American Catholicism, including Fordham’s nationally-renowned radio station, WFUV, and the use of artwork at U.S. Jesuit colleges and universities to commemorate the 1989 martyrs of El Salvador. Tim’s teaching has included the courses Faith & Critical Reason, American Religious Texts & Traditions, and Protestant Texts. Now at his fourth Jesuit institution, his teaching is deeply informed by the Ignatian-Jesuit tradition.
A St. Louis native and a current resident of The Bronx, Tim devotes much of his free time to live music and moviegoing. He holds professional memberships in the American Catholic Historical Association and the American Academy of Religion, and tweets from @Dulle048.