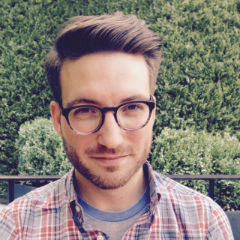 MA, Union Theological Seminary in the City of New York

John Gleim is a doctoral candidate in theology at Fordham University, where he studies the history of Christianity in the modern West. John’s current research focuses on the cultural and intellectual world of eighteenth century American Protestantism, in particular the relationship between the (increasingly post-Puritan) culture of the late-colonial period and the system of “New Divinity” developed by Samuel Hopkins and other New England Calvinists deeply influenced by Jonathan Edwards and the First Great Awakening.

John also has strong research interests in the history of American liberal theology; apocalypticism and eschatology; contemporary Catholic and Protestant political theology; theory and method in the study of religion; and philosophical materialism, especially the work of Alain Badiou.

He also holds an MA in systematic theology from Union Theological Seminary in the City of New York, where his Master’s thesis considered contemporary philosophical and theological approaches to the concept of the event, and a BA in philosophy from Messiah College.

John lives in Brooklyn, appreciates modern art, and is a lover of deep-fried foods.