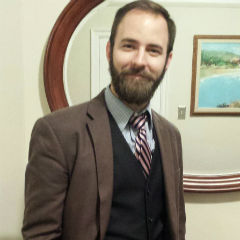 MA, The Catholic University of America (Christian Near Eastern Studies; Major in Syriac, Minor in Coptic)

Alex Miller is a student of historical theology interested in doctrinal controversies of the early Church, particularly in learning about how and why these theological issues were felt in the daily lives of ordinary Christians. As a result, he has also been drawn into the renewed attention to the early Church in 19th and 20th century thinkers (Newman, Gueranger, Nouvelle Théologie). He began this pursuit with a foundation in theology and philosophy at Georgetown University, where he wrote his honors thesis on Gregory Nazianzen and J.H. Newman. Turning his attention to the historical and philological work (Greek, Latin, Syriac, and Coptic) needed to study the early Church, Alex earned an MA in Early Christian Studies at the University of Notre Dame, and this lead to an MA in Christian Near Eastern Studies at The Catholic University of America, where he spent two years improving his Syriac, Coptic, and Armenian. Under the direction of Joseph T. Lienhard, SJ, Alex's dissertation research focuses on the theological anthropology of Cyril of Alexandria.