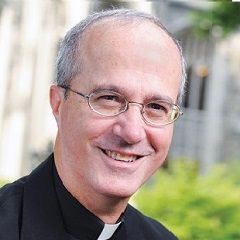 R. Bentley Anderson, SJ is Chair of the Department of African and African American Studies and Associate Professor of African and African-American Studies. A Jesuit from the New Orleans Province, Fr. Anderson’s research deals with the issue of race and religion in the southern United States and South Africa in the post-World War II period. He is the author of Black, White, and Catholic: New Orleans Interracialism, 1947-1956 (Vanderbilt 2005) and several articles that deal with Jim Crow Catholicism. His course offerings focus on Trans-Atlantic race relations, South African history, and Religion & Civil Rights in the United States.

"Parallels of Being Catholic in the American South and in South Africa" Fordham News, 8.30.17

"Learning About South Africa's Future from Stories of its Past" Fordham News, 9.8.14