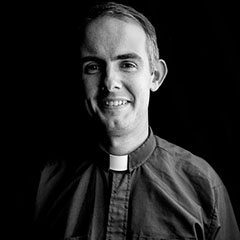 The New Evangelization: One Priest’s Approach 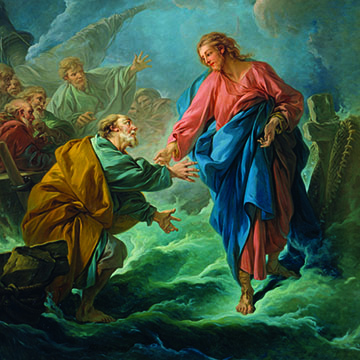 Father Joseph Gill is a man with a mission. When he was 14, a pilgrimage to Rome and exposure to its Christian heritage left him with a question that would prove transforming: “What can I do with my life to glorify God?” Today he carries out this mission in a variety of mediums. In addition to serving as chaplain at Trinity Catholic High School in Stamford, Connecticut, he is a singer and musician (keyboard and guitar) who has produced several albums of Christian rock. He is also a blogger who has inspired many followers on the internet and is the author of Days of Grace, a spiritual novel of suspense. In all of his pursuits, Father Gill shares his profound encounter with Jesus Christ: “I want to give my life to him and to make him known and loved, so that he may set souls ablaze with a passion for holiness."

RSVP for The New Evangelization

The Hobart-Ives Lecture Series at Fordham University focuses on contributions of contemporary Catholic thinkers within a pluralistic society. The series is named for Levi Silliman Ives (1797–1867), a former Episcopalian bishop who became a professor of rhetoric at Fordham, and his wife, Rebecca Hobart Ives (1803–1863), daughter of John Henry Hobart—an Episcopalian bishop—and goddaughter of St. Elizabeth Ann Seton. Following their conversion, they devoted their lives to promoting Catholic causes, especially the protection of destitute and abandoned children.

Shakespeare and the Essex Rebellion

A Discussion with Clare Asquith, Countess of Oxford and Asquith

The noted Shakespearean scholar Clare Asquith, Countess of Oxford and Asquith, will speak about her latest book, Shakespeare and the Resistance. Lady Oxford focuses her research on Shakespeare’s narrative poems—Venus and Adonis and The Rape of Lucrece—as works that addressed the tyrannical power of the Cecils under Queen Elizabeth I and which played an important role in the Essex Rebellion of 1601.

The Curse of Macbeth

What is the origin of the idea that bad luck surrounds the play? It is not Shakespeare’s most violent play, nor his most tragic. Many contemporary dramas also featured witches, black magic, and murder. Yet there is something uniquely sinister about. Unnatural occurrences are said to have disrupted performances. Actors still superstitiously avoid mentioning the name of the “Scottish Play.” This talk will explore the possible causes of the legendary curse and propose a theory of why, from the very beginning, Shakespeare and his acting company might have felt uneasy about performing what has since become one of his most popular plays.

Catholics in Connecticut? The Long Life of Legal Intolerance

Peter McClean Ryan, Esq.
This lecture explored the long reach of the so-called Ludlow (Peters) Code, which originated in the Hartford and New Haven Colonies. This code, named for Roger Ludlow, the first lawyer in Connecticut, was used by the Puritans to uphold their position as God’s elect and to deny legal rights to others: Anglicans, Quakers, Catholics, and Jews. This worldview clashed with the ideals of the American Revolution, as later expressed in the Bill of Rights, which was not ratified by the State of Connecticut until 1939. An independent scholar of the history of colonial intolerance, Peter McClean Ryan has practiced law, with an emphasis on litigation, for 40 years in Darien, Conn. He is a graduate of the University of Pennsylvania Law School. Mr. Ryan has had two cases decided on the merits by the United States Supreme Court.

Shakespeare and the Image of Holiness

Clare Asquith, Countess of Oxford and Asquith
Clare Asquith, is an independent scholar, the author of Shadowplay: The Hidden Beliefs and Coded Politics of William Shakespeare. When her husband Raymond, the Earl of Oxford and Asquith, was British Ambassador to the USSR, she noted how contemporary Soviet plays would covertly mention, evaluate, and even criticize the tyranny that existed in Soviet society. Starting from the hypothesis that Shakespeare was in fact a Catholic living under religious tyranny, Clare has investigated his writings for evidence that they too were an outlet for the views of the marginalized Catholic community. Herself a descendant of the Pollen and Baring families, Clare and Raymond live in Mells Manor, the ancestral home of the Horner family whose acquisition of this "plum" property in the time of Henry VIII is memorialized in the nursery rhyme "Little Jack Horner." Raymond's grandmother Katharine, the last of the Horners, married Raymond Asquith, the Prime Minister's son, in 1907 and later converted to Catholicism. Mells Manor has since then been a second home for other famous converts, including Monsignor Ronald Knox, Maurice Baring, and Siegfried Sassoon.