Undergraduate
The Brontës in Context
Gothic Legacies
Victorian Literature:
Modernity and Its
Discontents

Graduate
Fetishism and the Victorian
Novel 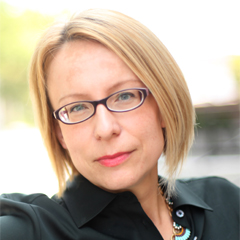 In addition to being Dean of Faculty of Arts and Sciences and Associate Vice President of Arts and Sciences, Professor Badowska also publishes on Victorian fiction (in Victorian Studies, PMLA and Victorian Literature and Culture), feminist theory (in Tulsa Studies in Women’s Literature), psychoanalytic theory (in The Psychoanalytic Review) and Polish poetry (in Parnassus: Poetry in Review), as well as the “Anne Brontë” entry in the Blackwell Encyclopedia of Victorian Literature. Professor Badowska a volume of essays, co-edited with Francesca Parmeggiani, on Krzysztof Kieślowski’s ten-film series on the Ten Commandments, Of Elephants and Toothaches: Ethics, Politics and Religion in Krzysztof Kieślowski’s Decalogue (Fordham University Press, 2016), which includes Badowska’s essay, “States of Exception: Politics and Poetics in Decalogue Six.” Currently Professor Badowska is working on Krzysztof Kieślowski—Between History and Theory, a short book that seeks to revise the standard critical tendency to regard the director’s work as ahistorical, instead placing his interpretation of the Ten Commandments in the context of the Polish 1980s, a period of profound social unrest and cultural change.