Our M.A. graduates include many who have received doctoral degrees at Fordham and elsewhere, as well as those who have become professors, lawyers, writers, museum directors, and librarians, or enjoyed successful careers in business, school, and college administration, the police force, and the military, among other occupations. Our M.A. and Ph.D. graduates include two college presidents, the past chief of police of New York City, and best-selling authors.

Our alumni pursue a variety of careers in a wide number of fields. Several are featured below. If you would like to be featured on the Fordham History Department website, email the department chair, Dr. David Hamlin. Ted German graduated in 2013. He currently lives in Charlottesville, Virginia, where he is working as an EMT and searching for a teaching job where he can use his degree! Ted also serves as a Captain in the Marine Corps Reserve. In his free time, Ted has been doing a lot of mountain climbing, and recently summited the highest peaks in Scotland, England, and Wales to raise money for children's hospitals in the UK and US. 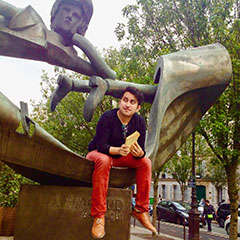 Louie Dean Valencia graduated in with his Ph.D. and M.A. in History from Fordham (2016, 2010). As a graduate student, he received fellowships from the Andrew W. Mellon Foundation and the United States Library of Congress, amongst others. After graduating, he was appointed as a Lecturer on History and Literature at Harvard University, and currently is an Assistant Professor of History at Texas State University. He published his dissertation in 2018 as Antiauthoritarian Youth Culture in Francoist Spain: Clashing with Fascism (Bloomsbury Academic). He is the founding co-chair of the Critical European Studies Research Networkfor the Council for European Studies (CES) at Columbia University, and is a research editor of the CES’ monthly digital journal, EuropeNow. He has served as a director of the Leadership Enterprise for a Diverse America Summer Institute at Princeton University. He is a Senior Fellow for the London-based Centre for the Analysis of the Radical Right, and has recently finished editing the volume Far-Right Revisionism and the End of History: Alt/History (Routledge, 2020). Michael Vargas earned his Ph.D. in 2006. He is currently an associate professor of History at the State University of New York at New Paltz, where his course titles include Jihad and Crusades, Medieval Traveler, Inquisition, Kings and Kingdoms, The Medieval Spains, and Medieval Towns. He was named Mentor of the Year in the spring of 2013 by the advisory committee of the SUNY New Paltz Research, Scholarship and Creative Activities Program for his work with students on special projects beyond the classroom. His book, Taming a Brood of Vipers: Conflict and Change in Fourteenth-Century Dominican Convents (Brill, 2011) received the La Corónica International Book Award for 2013 and earned an honorable mention in the 2013 Association for Spanish and Portuguese Historical Studies Best First Book Prize competition. The book will be featured for discussion at a session sponsored by La Corónica at the Medieval Congress at Kalamazoo in 2014. Michael is currently on sabbatical, and has received a Fulbright Senior Scholar Award to conduct research in Barcelona, Spain, on the history of Catalonia’s political and bureaucratic designs on Sicily and Sardina in the Late Middle Ages.