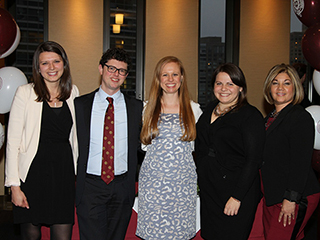 The Office for Student Involvement staff is composed of professional staff members committed to developing student leaders and serving the Fordham University community.

Daniel joined the Office for Student Involvement staff in January 2009. In this role as Associate Director for First Year Experience, he oversees the New Student Orientation program, and supervises the Commuter Freshman Mentor program. In these capacities, Daniel supports the transition of new students to the Lincoln Center campus by helping them acclimate to all aspects of life as a college student in New York City. Prior to coming to Fordham, Daniel worked as a Resident Director in First Year halls at Loyola Marymount University, in Los Angeles, CA. Originally from the Midwest, Daniel grew up in Illinois, received his Bachelor of Arts Degree in English from the University of Iowa, and his Master of Science degree in Counseling and Student Personnel from Minnesota State University, Mankato.

Christina joined the Fordham staff in August 2010 as the Graduate Intern for Commuter Student Services, in May 2012, she became the Assistant Director for Programming and in December 2017 she became the Associated Director. Christina helps the 57+ clubs at the Lincoln Center campus with their leadership development and programming needs. She completed her Master of the Arts degree in Higher Education/Student Personnel Administration from New York University in May 2012, and received her Bachelor of Arts Degree in English from Fordham University at Lincoln Center in May 2007.

Melissa joined the Fordham staff in August 2019. As the head of the Alcohol and Other Drug Education program, she does preventative and alternative programming, trains student leaders on campus surrounding substance misuse and abuse issues and meets with students who have been referred for violation of the University's drug and alcohol policy. She also advises the student run club BeWellLC and the Wellness Educators, the Campus Activities Board, and guides various student clubs as they create programming initiatives and activities surrounding general health and wellness issues and topics pertinent to college students. She completed her Master of Education in College Student Affairs at Rutgers University in May 2016, and received her Bachelor of Arts Degree in History from Fordham University at Lincoln Center in May 2014.

Sandy Vargas joined the Fordham staff in August 2008. She manages the day to day activities of the Office for Student Involvement. She provides administrative support to the Dean of Students as well as the staff, administers budget funds for the student clubs, provides club support, and supervises the student worker staff. Sandy is the advisor for SOL (Student Organization of Latinos). Sandy graduated with her bachelor’s degree in Organizational Leadership from the Fordham School of Professional and Continuing Studies.

As the intern for First Year Experience, Alexis assists the Associate Director in the advisement of the Commuter Freshman Mentor (CFM) Program and the Fordham University Emerging Leaders (FUEL) Program. She also takes part in Orientation and Family Weekend programming. Alexis earned a Bachelor of Arts in English and Philosophy & Religious Students with a double minor in Classical & Medieval Students and Women & Gender Studies from Pace University in NYC. She is currently enrolled at New York University (NYU) in the Higher Education and Student Affairs Masters program.

As the Intern for Programming, Stephanie assists the Associate Director in the advisement of clubs, leadership training, and program development. She also takes part in Leadership Weekend, weekend programming, Spring Fling, and FACE (Fordham Advocates Cultural Enrichment). Stephanie earned a Bachelor of Arts in Communication with a minor in Psychology at the University of Connecticut. She is currently enrolled at New York University (NYU) in the Higher Education and Student Affairs Masters program.

As the Graduate Intern for Student Organizations, Emilie assists in advising the student clubs on campus, club programming, and leadership development. She also serves as the adviser for the Commuting Students Association (CSA) at Fordham LC. Originally from Dutchess County, New York, Emilie moved to NYC four years ago to attend the College of Mount Saint Vincent where she received her B.A. in English Literature. She spent two semesters abroad in Montpellier, France, and Dublin, Ireland, studying language and completing over 300 hours of community service work with Homeless and At-Risk youth. Emilie is now pursuing her masters in English/Irish Literature with Fordham University's Graduate School of Arts and Sciences.