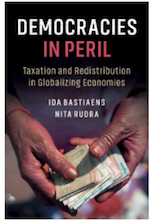 Globalization is triggering a 'revenue shock' in developing economies. International trade taxes - once the primary source of government revenue - have been cut drastically in response to trade liberalization. In the book, Democracies in Peril: Taxation and Redistribution in Globalizing Economies (Cambridge University Press, 2018), Dr. Ida Bastiaens and Dr. Nita Rudra make the novel argument that regime type is a major determinant of revenue-raising capacity once free trade policies have been adopted. Specifically, policymakers in democracies confront greater challenges than their authoritarian counterparts when implementing tax reforms to offset liberalization's revenue shocks. The repercussions are significant: while the poor bear the brunt of this revenue shortfall in democracies, authoritarian regimes are better-off overall. Paradoxically, then, citizens of democracies suffer precisely because their freer political culture constrains governmental ability to tax and redistribute under globalization. This important contribution on the battle between open societies and the ability of governments to help their people prosper under globalization is essential reading for students and scholars of political economy, development studies and comparative politics. 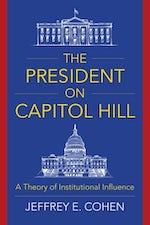 Dr. Jeffrey Cohen’s book, The President on Capitol Hill: A Theory of Institutional Influence (Columbia University Press 2019), asks if presidents influence whether Congress enacts their agenda. Most research on presidential-congressional relations suggests that presidents have little if any influence on Congress. Instead, structural factors like party control largely determine the fate of the president’s legislative agenda. Dr. Cohen challenges this conventional view, arguing that existing research has underestimated the president’s power to sway Congress and developing a new theory of presidential influence. By testing all House roll calls from 1877 to 2012, Cohen finds that not only do presidents have more influence than previously thought, but through their influence, they can affect the substance of public policy. 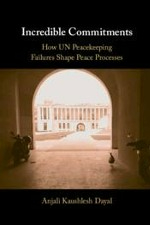 Dr. Anjali Dayal's book, Incredible Commitments: How UN Peacekeeping Failures Shape Peace Processes (Cambridge University Press, 2021), asks why UN peacekeeping survived its early catastrophes in Somalia, Rwanda, and the Balkans, and how this survival should make us reconsider how peacekeeping works. She makes two key arguments: first, she argues the UN's central role in peacemaking and peacekeeping worldwide means UN interventions have structural consequences – what the UN does in one conflict can shift the strategies, outcomes, and options available to negotiating parties in other conflicts. Second, drawing on interviews, archival research, and process-traced peace negotiations in Rwanda and Guatemala, Dayal argues warring parties turn to the UN even when they have little faith in peacekeepers' ability to uphold peace agreements – and even little actual interest in peace – because its involvement in negotiation processes provides vital, unique tactical, symbolic, and post- conflict reconstruction benefits only the UN can offer. 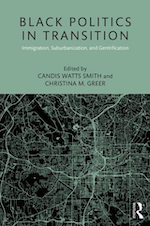 Dr. Christina Greer and Dr. Candis Watts Smith co-edited the book, Black Politics in Transition: Immigration, Suburbanization, and Gentrification (Routledge 2018), which considers the impact of three transformative forces—immigration, suburbanization, and gentrification—on Black Politics today. Drawing on a wide array of disciplinary perspectives and methodological strategies, original chapters analyze the geography of opportunity for Black Americans and Black politics in accessible, jargon-free language. Dr. Greer was recently named an NYU McSilver Fellow, and received the 2018 Award for Excellence in Undergraduate Teaching in the Social Sciences at Fordham University. She hosts The Aftermath with Christina Greer and is also the co-host of the FAQ-NYC podcast. Dr. Greer is also a frequent commentator on WNYC, NY1, and MSNBC. 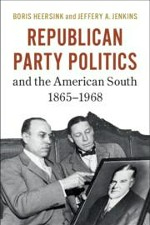 In the book, Republican Party Politics and the American South, 1865-1968 (Cambridge University Press, 2020), Dr. Boris Heersink and Dr. Jeffery A. Jenkins examine how National Convention politics allowed the South to remain important to the Republican Party after Reconstruction, and trace how Republican organizations in the South changed from biracial coalitions to mostly all-white ones over time. Little research exists on the GOP in the South after Reconstruction and before the 1960s. Republican Party Politics and the American South, 1865–1968 helps fill this knowledge gap. Using data on the race of Republican convention delegates from 1868 to 1952, the authors explore how the 'whitening' of the Republican Party affected its vote totals in the South. Once states passed laws to disenfranchise blacks during the Jim Crow era, the Republican Party in the South performed better electorally the whiter it became. These results are important for understanding how the GOP emerged as a competitive, and ultimately dominant, electoral party in the late-twentieth century South. This book was the co- winner of the 2021 J. David Greenstone Prize from the Politics and History Section of the American Political Science Association and the winner of the 2021 V.O. Key Award from the Southern Political Science Association. 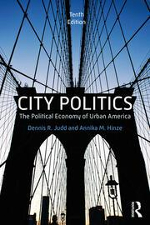 Dr. Annika Hinze and Dr. Dennis R. Judd co-edited the tenth edition of the textbook, City Politics: The Political Economy of Urban America (Routledge, 2019). This comprehensive resource for undergraduate and graduate students, as well as well- established researchers in the discipline, is a classic study of urban politics. Its enduring appeal lies in its persuasive explanation, careful attention to historical detail, and accessible and elegant way of teaching the complexity and breadth of urban and regional politics which unfold at the intersection of spatial, cultural, economic, and policy dynamics. 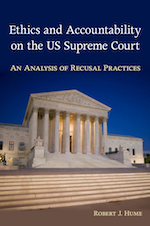 Dr. Robert Hume's book, Ethics and Accountability on the US Supreme Court: An Analysis of Recusal Practices (SUNY Press, 2017) examines the causes and consequences of recusal behavior on the US Supreme Court. Ryan C. Black in the Law and Politics Book Review writes, “Hume’s efforts are overwhelmingly successful and the result is a compact and accessible text that significantly enhances our understanding of an aspect of decision making that lands in the scholarly sweet spot of being really important but woefully understudied.” Dr. Hume’s textbook, Judicial Behavior and Policymaking: An Introduction (Rowman & Littlefield 2018), is also now available. 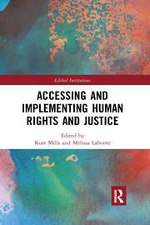 Dr. Kurt Mills and Dr. Melissa Labonte co-edited the book, Accessing and Implementing Human Rights and Justice (Routledge, 2019). Although an understanding of justice is inherent in broad human rights discourses, there is no clear consensus on how to develop adequate means of accessing them in order to make a difference to people’s lives. Further, expansions of the boundaries of both human rights and justice make any clear and settled understanding of the relation difficult to ascertain. This volume tackles these issues by focusing on the dilemmas of accessing and implementing human rights and justice across a range of empirical contexts while also investigating a range of conceptual approaches to, and understandings of, justice, including issues of equality, retribution, and restoration, as well as justice as a transnational professional project. 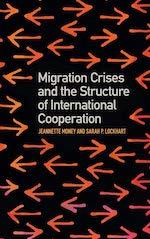 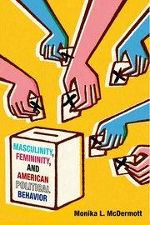 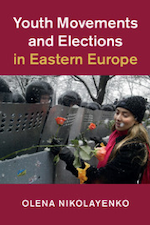 Dr. Olena Nikolayenko's latest book, Youth Movements and Elections in Eastern Europe (Cambridge University Press, 2017), examines the development of nonviolent youth movements and state countermoves during national elections in five post- communist societies: Azerbaijan, Belarus, Georgia, Serbia, and Ukraine. At the turn of the twenty-first century, a tide of nonviolent youth movements swept across Eastern Europe. Young people demanded political change in repressive political regimes that emerged since the collapse of communism. The Serbian social movement Otpor (Resistance) played a vital role in bringing down Slobodan Milosevic in 2000. Inspired by Otpor's example, similar challenger organizations were formed in Azerbaijan, Belarus, Georgia, and Ukraine. The youth movements, however, differed in the extent to which they could mobilize citizens against the authoritarian governments on the eve of national elections. This book argues that the movement's tactics and state countermoves explain, in no small degree, divergent social movement outcomes. 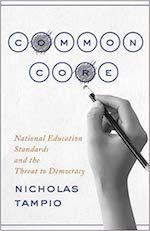 Dr. Nicholas Tampio's incisive critique of the Common Core (Johns Hopkins University Press, 2018) sparked a national conversation about education standards. His most recent volume, Learning versus the Common Core (University of Minnesota Press, 2019), furthers the debate. Dr. Tampio explains how standards-based education reform is transforming nearly every aspect of public education by looking closely at the standards, the agenda of people pushing standards-based reform, and how these fit within a global pattern of education reform. With a nod to the philosophy of John Dewey, Dr. Tampio concludes with a vision of what democratic education can look like today—and how people can form rhizomatic alliances across different political and ethical backgrounds to fight the Common Core. Dr. Tampio also regularly writes about education and politics for outlets such as Aeon, the Conversation, Phi Delta Kappa, and US News & World Report.