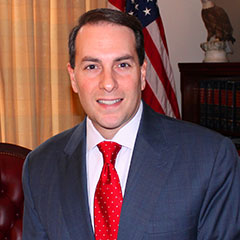 Author, columnist, speaker and commentator Tom Basile has been in the middle of the action on the biggest stories and hottest issues of the last two decades. His work in the worlds of politics, government, media and business have made him a powerful voice in our national conversation and a sought-after lecturer and contributor in the media.

The former host of ‘Sunday in America’ on SiriusXM Radio and an opinion contributor to Forbes and other publications, his insights into the national political scene, public policy and foreign affairs have earned him a reputation for credibility, candor and common sense. In 2011, he was one of only two American conservatives featured as part of Time Magazine’s Person of the Year spread about citizen engagement around the world.

His critically-acclaimed book Tough Sell: Fighting the Media War in Iraq (Potomac, 2017), gives readers his personal account of the Iraq mission during the first year after the fall of Saddam Hussein and the daily battle to communicate about the war to an American public increasingly opposed to the mission. The book earned a foreword by National Security Advisor and former UN Ambassador John R. Bolton.

For more than 20 years he has provided strategic and crisis communications counsel to companies, policy organizations, government agencies, non-profits, advocacy campaigns and grassroots groups. From crafting effective messaging and content development to developing effective on-the-ground grassroots operations and managing crises in the media, Basile’s work has ensured his clients get noticed by customers, opinion leaders, policymakers and the press.  Basile’s strategies and hands-on approach have garnered international attention in the world’s most influential media outlets.

From 2009-2011 he served as Executive Director of the New York State Republican Party. During his time as Executive Director, the GOP erased several cycles of losses at the local and county levels of government, recaptured its majority in the NYS State Senate and won more Congressional seats for the new Republican majority in the House of Representatives than any other state in the nation.

In 2008, Basile represented the office of the US Chief of Protocol to the Vatican Delegation during the visit of His Holiness Pope Benedict XVI to New York. In 2005, he served as a lead planner for the Department of State of the historic visit of former Presidents Bush and Clinton to the tsunami-ravaged areas of South Asia.

In March, 2004, he returned from seven months in Baghdad, Iraq where he served at the request of the White House as a Senior Press Advisor to the Coalition Provisional Authority. While in Iraq, he was a spokesperson and strategist for the Coalition’s media operations. He was awarded the Joint Civilian Service Commendation from the Department of Defense for his work with the Coalition.

Basile is also a former Director of Communications for the US Environmental Protection Agency in Washington where he managed the EPA Administrator’s public liaison operation and developed stakeholder outreach initiatives for a variety of environmental issues.

During the Bush Presidency, he was often called upon by the White House to help plan significant meetings and events for President Bush including the memorial service for the Space Shuttle Columbia Astronauts in Houston, the President’s 2002 meeting with Pope John Paul II at the Vatican, activities surrounding the 57th United Nation’s General Assembly and Bush’s visit to the Nazi concentration camps outside Krakow, Poland. After serving as a consultant to the Republican National Committee during the 2004 Presidential election, he was named Press Secretary to the Joint Congressional Committee on Inaugural Ceremonies. In this role he supervised the media and public affairs operation for the 2005 Presidential Inauguration. He is one of a small group of Americans who has helped manage Presidential Inaugurations representing both the President and the Congress.

In 2010 Basile was named to The Capitol Newspaper’s 40 Under 40 list of New York political influencers. Basile sits on the Advisory Board of the Hofstra University College of Liberal Arts and Sciences and the Kalikow School of Government, Public Policy and International Affairs. He received his Juris Doctorate attending Fordham and Georgetown University Schools of Law and is a member of the New York Bar. He and his wife Carrie have three young children and a golden retriever named Brooke.