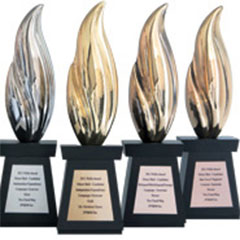 Awarded annually by the AAPC, the Pollies are the most prestigious awards in the political campaign and public affairs industry. This year, Fordham students received more Pollie Awards in more categories than any other program.

"We are so proud of our students and delighted that the AAPC has recognized these students for excellence in political advertising," said Costas Panagopoulos, PhD, director of the master’s program in elections and campaign management (ECM) at Fordham. "The Pollie winners exemplify the standard of excellence that students in the ECM program are trained to achieve."

Most of the entries that Fordham students submitted were created as part of the "Strategies and Mechanisms of Political Communication" course co-taught during the fall 2008 term by veteran instructors and leading political strategists Joseph Mercurio and Bart Robbett.

The students will receive their awards on March 29 at the AAPC’s 2009 Pollie Awards and Conference in Washington.

"The AAPC Student Pollies are a great way for students to receive national recognition for work in their campaigns," said Angela McMillen, executive director of the AAPC. "Our entries increased 60 percent over last year, and we hope this continues to grow."

The AAPC is a multi-partisan trade association with more than 2,500 members from all 50 states, territories and other countries. Membership reflects a wide range of ideologies, partisan affiliations and professional specialties, and includes students and academics.

Founded in 1841, Fordham is the Jesuit University of New York, offering exceptional education distinguished by the Jesuit tradition to approximately 14,700 students in its four undergraduate colleges and its six graduate and professional schools. It has residential campuses in the Bronx and Manhattan, a campus in Westchester, and the Louis Calder Center Biological Field Station in Armonk, NY