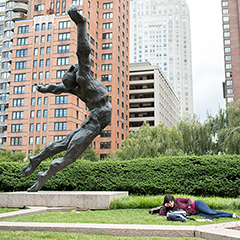 19th-Century Music covers all aspects of Western art music between the mid-eighteenth and mid-twentieth centuries. The journal welcomes—in no particular order—considerations of composers and compositions, styles, performance, historical watersheds, cultural formations, critical methods, musical institutions, ideas, and topics not named on this list. The aim is to publish contributions to ongoing conversations at the leading edge of musical and multidisciplinary scholarship.

The journal was founded in 1973 to remedy the surprising lack of scholarship on the music of the chronological nineteenth century despite the prominence of the century's music on concert programs. The remedy worked; in the years since, this music has outranked all but that of the twentieth century as a magnet for scholars, critics, and historians. A survey of citations will show that this development is due in large part to the reputation of 19th-Century Music as a hospitable platform for both discovery and innovation. Since the 1990s the journal has expanded its field to cover the "long" nineteenth century (ca. 1789-1919 and even later) and is open to studies involving both the heritage and the legacy of the century's music, including studies of sound recording, film, and performance practice.

Nineteenth-Century Music is edited by Lawrence Kramer, Distinguished Professor of English and Music at Fordham. Shared between Yale and Fordham after 1992, the journal moved to Fordham alone in 2006. During 2009, three of our authors won "best article" awards from three separate scholarly organizations.