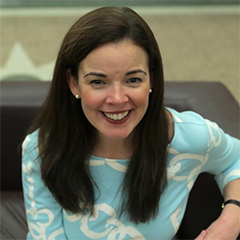 A recent transplant to New York, Alexis Harrigan was thrilled when she happened upon WFUV. She was even happier when she heard WFUV’s on-air advertisement seeking a Director of Development. She enjoys a diverse playlist, including but not limited to Blur, The Jesus and Mary Chain, De La Soul, The Magnetic Fields, Wilco, Lucinda Williams, and Yo La Tengo, and looks forward to more music discovery during her time with WFUV.

Prior to joining WFUV, Alexis worked for Community Counseling Service, a fundraising consulting firm, where she directed capital campaigns, and conducted feasibility studies and development audits for a variety of organizations. She served as the Chief Development Officer for PeacePlayers International, a non-profit organization bringing children from communities in conflict (Northern Ireland, Israel and the West Bank, Cyprus, and South Africa) together to play basketball. Most recently, she served as Interim Director of Advancement and Director of Development for the Menil Collection, a Houston visual arts museum housing the collection of John and Dominique de Menil.

A native of Washington, DC, Alexis Harrigan earned her BA in art history and studio art from Colgate University. She attended the School of the Art Institute of Chicago where she pursued a master’s degree in Art History, Theory, and Criticism. Following her time in Chicago, Alexis earned an MBA from Trinity College in Dublin, Ireland. She lives in Harrison, New York with her husband, Brendan Morgan, and their daughter Quinn, who keeps them on their toes. In her spare time, she enjoys music class with her daughter, traveling, visiting museums, swimming and scuba diving.