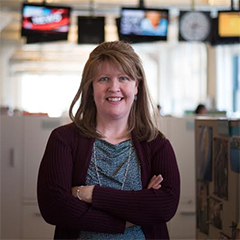 Julianne Welby has been working in public media since 1990 as a reporter, producer, host and news manager. As Senior Editor at WNYC, she supervises breaking news, enterprise and data-driven reports, as well as special projects that focus on civic journalism. She recently edited multi-platform features about hospital deaths, school vaccinations and pollution.

She also frequently hosts the station's local broadcast of All Things Considered. Julianne’s career took root as a Fordham undergraduate at WFUV. There, she cut her teeth — and lots of tape — covering everything from casitas in the Bronx to the rebound of the Meadowlands. She went on to develop her craft reporting on the environment, politics and neighborhoods at public radio stations in Salisbury, MD and Washington, DC, and contributed reports to NPR and other networks.

She returned to WFUV in 2000 to lead the newsroom and further develop its reputation as a nationally-recognized training ground for aspiring journalists. She continues in her role as a trainer for Public Radio News Directors, Inc., and she serves on several journalism boards, including Fordham's Walsh Scholarship Committee (she was the 1993 recipient) and the duPont screening review board. You can see more of her work on the WYNC website.