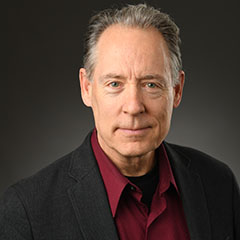 Matthew Maguire is the co-founder of the Fordham/Primary Stages MFA in Playwriting.

He was a co-artistic director of Creation Production Company, which produced over fifty new works. He is the author of Wild Man, which played in New York and Los Angeles, Instinct, which premiered Off-Broadway at Theatre Row, The Tower, Phaedra, Abandon (Obie Award), Skin (with architects Diller & Scofidio at the Palais des Beaux Arts in Brussels), among many others. He created A Descent Into the Maelström with Philip Glass and Molissa Fenley for Australia’s Adelaide Festival.

A proud alumnus of New Dramatists, he has received fellowships from the National Endowment for the Arts, the McKnight and Hammerstein Foundations, New York Foundation for the Arts, and commissions from the NEA, NYSCA, and Meet the Composer.

His most recent book is Matthew Maguire: Three Plays (NoPassport Press), which includes The Tower, Luscious Music, and The Desert. He is currently working on a commission from Mabou Mines to write an adaptation of Goethe’s Faust Part II, which will premiere in spring 2018.