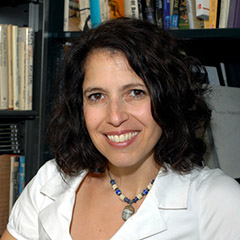 Elizabeth Margid is head of the Directing Program at Fordham University, where she has taught and directed for the past 20 years. Outside of Fordham, she has directed a wide variety of classical, musical, and original work at venues including The Yale Repertory Theatre, Berkshire Theatre Festival, Hangar Theatre, Soho Rep, New Georges, 78th Street Theatre Lab, Kitchen Theatre, Edinburgh Festival, Ko Festival, and New Dramatists, where she served as a resident director. Most recently she developed and directed Ace by Emmy award-winning writer Ted Greenberg, which played at the Annenberg Center in Philadelphia followed by a commercial run in New York. She is also the librettist for a new music-theatre adaptation of Ray Bradbury’s The Martian Chronicles, which was workshopped at the Orlando Shakespeare Festival, Fordham, and Miami University in Ohio, and presented in concert form at Ars Nova in 2015. Ms. Margid was awarded Yale School of Drama’s John Badham Directing Fellowship and is a two-time recipient of the New York State Council on the Arts’ Artistic Associate Grant.