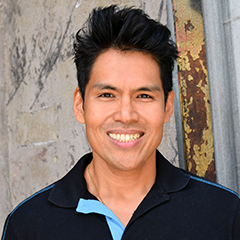 Head of Design and Production
Scenic and Costume Designer

Clint Ramos is a scenic and costume designer and is the recipient of a TONY Award for Best Costume Design of a Play, an OBIE Award for Sustained Excellence in Design, 3 Lucille Lortel Awards and 6 nominations, 2 American Theatre Wing Henry Hewes Awards and 8 nominations, TDF Irene Sharaf Young Master Award, Helen Hayes Award, Craig Noel Award, and 2 Drama Desk nominations, among other awards.

He is also the recipient of the Ani ng Dangal presidential medal for dramatic arts from the President of the Philippines. He received this honor twice.

He has designed sets and/or costumes for over a hundred theater, opera, and dance productions. Selected credits include the Broadway productions of Once On This Island, Six Degrees of Separation with Allison Janney, Sunday in the Park With George with Jake Gyllenhaal, In Transit, Eclipsed with Lupita Nyong’o, Violet with Sutton Foster and The Elephant Man with Bradley Cooper (also West End). Highlights also include Bella, Kid Victory, Sweet Charity, Here Lies Love (NY, Seattle and at the National Theatre, London), Dry Powder with Claire Danes and John Kazinsky, Barbecue, The Good Person of Szechuan, Appropriate, Wild With Happy, Bootycandy and many more. He is the principal costume designer for City Center Encores! Off-Center.

Mr. Ramos was a professor in scenic design at SUNY Purchase, and has been a visiting professor/artist at New York University’s Tisch School of the Arts Department of Design.

He holds a Master of Fine Arts from New York University where he attended on the Gary Kalkin Memorial Scholarship. He is from the Philippines.