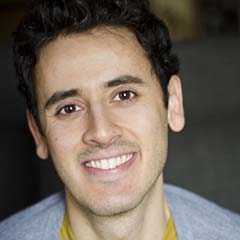 Tony Meneses was born in Guadalajara, Mexico, and raised in Albuquerque and Dallas. His plays include Guadalupe in the Guest Room and The Women of Padilla, which both had world premieres at Two River Theatre. He’s a past Soho Rep Writer/Director Lab member, Ars Nova Resident Playwright, Playwright Fellow at the Sundance Institute Playwrights Retreat at Ucross, Playwrights Realm Writing fellow, and has been previously developed at the LARK Playwrights’ Week and the Berkeley Rep Ground Floor. He’s also a previous recipient of the Kennedy Center ACTF Latino Playwriting Award. He is published by Dramatists Play Service and is under commission from the Denver Center and Two River Theatre. Alumni: Youngblood at EST. MFA: Iowa Playwrights Workshop. BA: The University of Texas at Austin. He is currently in the Lila Acheson Wallace Playwrights Program at the Juilliard School.