Learn about the typical lifestyle and values of many Americans by downloading the article below. 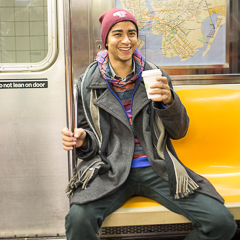 A New Way of Thinking

The different behaviors of a culture make sense only when seen through the basic beliefs, assumptions and values of that culture. When you encounter an action or hear a statement that surprises you, try to see it as an expression of that culture.

American culture is very individualist, meaning, Americans believe that every individual is so unique that a list of cultural values can not be applied to every citizen. However, most Americans have very similar expectations for appropriate behavior. Below are tips that should help you understand these expectations and grow your personally and professional relationships with Americans.

Being late to class, work shifts, and appointments is considered rude and is not acceptable. This is why Americans, especially New Yorkers, will end discussions abruptly and hurry along to their next destination. If you cannot avoid being late, even by 10 minutes, it is expected that you call or email ahead of time to tell the person you are meeting that you will be late.

Schedules and deadlines are also very important to American culture. An international student might notice that Americans seems to be more concerned with getting things accomplished (according to a predetermined schedule) than they are with interpersonal relationships. Time for productivity is so valued in American society that it has become apart of the culture. Keeping busy and not "wasting" time is a respectable behavior. Keep this in mind when turning in assignments and working on group projects.

Classrooms and work places have different levels of formality. It is best to assume that the culture in these environments will be casual or informal dress unless you are told otherwise. It is not disrespectful to address an authority figure in an informal way. Most teachers and bosses will prefer to be referred to as their first names rather than their surnames. It is a preference that you should comply to, especially if the person insists.

Americans prefer a direct approach when in comes to delivering criticism and bad news. They will discuss your flaws or mistakes openly with you which might take you completely by surprise. Please keep in mind that this sort of directness is a compliment. The person giving you criticism is usually trying to give you advice on how to perform better. It is an American belief that "constructive criticism" is an important ritual to increase productivity and improve quality of work.

Americans believe that competition and self-reliance bring out the best in individuals. Competition is inserted into the culture at young age and most of your American classmates will be familiar with this behavior. While there will be group projects where cooperation is vital, competition is still prevalent within the group dynamic.

Self-reliance or self-help is another cultural norm.  Asking questions and looking for guidance is acceptable behavior, however, it is up to the individual to take care of their own needs. For example, it is acceptable to ask a stranger for directions, yet it is not expected that the person giving you directions walk you to your destination.

To learn about the typical lifestyle and values of many Americans, please see this article, titled "Values Americans Live By."