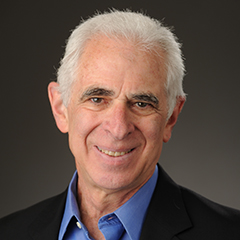 Email: fhandelman@blhny.com
Telephone: 212-277-5882
Fax:  212-277-5880
Frank Handelman practices law in Manhattan with the leading civil rights and civil liberties firm Beldock Levine & Hoffman.   His specialties include criminal defense, probate and elder law and real estate. During his more than forty years in practice, he has tried dozens of cases to verdict in both state and federal court and argued appeals before the New York Court of Appeals and the United States Court of Appeals. His clients have included the lead defendant in the 1993 World Trade Center bombing case and in 2006 the grand juror accused of leaking information in a major insider trading case. Prof. Handelman is former chair of the Elder Law Committee of the New York County Lawyers’ Association. He was the attorney for the alleged incapacitated person in the case that established the right to counsel for such individuals under New York State Mental Hygiene Law. Before entering private practice, Prof. Handelman was a defense attorney with the Legal Aid Society in the Bronx. He has a master's degree in social work, and prior to attending law school worked as a community organizer.
In addition to his law practice and teaching, he is a professional running coach. He is currently the head coach of FrankTraining, LLC, a track and long distance training program. From 2007 to 2011, he was the head coach and training director of Team for Kids for the New York Road Runners,  preparing thousands of runners for the New York City Marathon. As a runner he competed nationally and internationally, was the winner of the first Corporate Challenge race in Central Park, and was the 2003 and 2007 USA Masters 800 meter champion.
Since 2002, Prof. Handelman has been an adjunct professor at Fordham, teaching Fundamental Lawyering Skills. He also taught extensively with the Intensive Trial Advocacy Program (ITAP) at Cardozo Law School.
Prof. Handelman has been active for many years on community issues. He served as treasurer for the first two City Council campaigns of current Manhattan Borough President Gale Brewer.