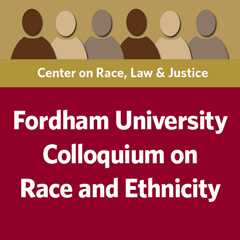 The Colloquium on Race and Ethnicity

The colloquium brings together scholars from Fordham and other New York-area institutions of higher education to discuss research on issues of race and ethnicity.

Join us for discussions of critical scholarship on core civil rights and social justice issues. 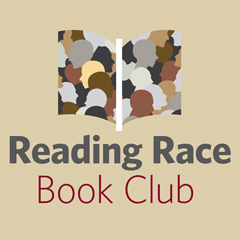 Concerned about issues of race in our society? Want to engage with others thinking about racial justice issues? Join the Reading Race Book Club.

February 26, 2018
Devil in the Grove: Thurgood Marshall, the Groveland Boys, and the Dawn of a New America
Gilbert King, Pulitzer Prize-winning author

Rethinking the Politics of Care Work

Ethno-racial Legislation in Peru: The Building Blocks for the Afroperuvian Political Subjectivity

Mariela Noles Cotito, Consultant to the Government of Peru; Teacher Assistant, Institute for the Study of Latin America and the Caribbean, University of South Florida

Fifty Years of Loving v. Virginia and the Continued Pursuit of Racial Equality

The Fordham Law Review Symposium, presented in conjunction with the Center on Race, Law & Justice, marked the 50th anniversary of the U.S. Supreme Court’s decision in Loving v. Virginia, 388 U.S. 1 (1967), and included a screening of excerpts of the HBO Documentary The Loving Story ;and roundtable discussions of the issues the decisin raises about interracial relationships, mixed-race children, and racial equality in the 21st Century.

Contracting Our Way to Inequality: American Sperm Markets and the Sale of Racial Essence

Criminal Procedure and the Good Citizen

Can the UN Stop Racism? A public forum with the UN Special Rapporteur on Racism, Mutuma Ruteere

Co-sponsored with the Leitner Center for International Law and Justice.

A Conversation on Race, Ethnicity & Immigration: Citizenship in Campaign 2016 & Beyond

Co-sponsored by the Center on Race, Law, and Justice and Fordham University's American Studies Program, Latin American and Latino/a Studies Institute, and Department of African and African-American Studies.

Conference organized by the Center on Race, Law, and Justice; and Feerick Center for Social Justice. Co-sponsored by the Fordham Urban Law Journal and Fordham University Graduate School of Education - The Center for Educational Partnerships.

The Minority Paradox: Blackness in France

Co-sponsored by the Center on Race, Law, and Justice, Department of Modern Languages and Literature, and the Program in Comparative Literature in collaboration with the Cultural Services at the French Embassy.

Judicial Diversity in France: The Unspoken and the Unspeakable

Co-sponsored by the Leitner Center for International Law and Justice.

The inaugural Reading Race Book Club discussion focused on a discussion of Blinded by Sight: Seeing Race Through the Eyes of the Blind with the author, Osagie K. Obasogie, Professor of Law, UC–Hastings.

The Colloquium on Race and Ethnicity brings together scholars from Fordham and other New York-area institutions of higher education to discuss research on issues of race and ethnicity.

Thursday, 20 October 2016
The End of Integration
Michelle Adams, Professor of Law and Co-Director of the Floersheimer Center for Constitutional Democracy, Cardozo Law

Colorblind Under Stress:
Experience of Discrimination and Antidiscrimination Policies in Europe
This installment of the Center's Speaker Series, presented on 30 March 2016, featured a discussion with Patrick Simon, director of research at the Institut National d'Etudes Démographiques.

Where Did All the White Criminals Go?
Reconfiguring Race and Crime on the Road to Mass Incarceration
This installment of the Center's Speaker Series, presented on 6 April 2016, featured a discussion with Khalil Gibran Muhammad, director of the Schomburg Center for Research in Black Culture.

King Making:
Brown v. Board and the Rise of a Racial Savior
This installment of the Center's Speaker Series, presented on 14 April 2016, featured a discussion with H. Timothy Lovelace, associate professor of law at Maurer School of Law, Indiana University.