Fordham University Circle K and Kiwanis have joined forces with POTS (Part of the Solution) to make a Thanksgiving donation of Cereal Boxes and Jars of Baby Food.  Please bring items to any of the following locations for pick-up and delivery to POTS by November 26.

POTS is located in one of the poorest US Congressional districts in the Bronx.  What is POTS?  IT's a "one-stop-shop" assisting individuals living in poverty on their journeys from crisis to stability, and ultimately, self-sufficiency.  Circle K is the collegiate service arm of Kiwanis International founded 50 years ago on the Rose Hill campus of Fordham University.

Thank you for your donation!

A Ribbon Cutting ceremony was held the week of August 19th at P.O.T.S. ("Part of the Solution") acknowledging Fordham Kiwanis and Circle K raising over $5000 toward the $15,000 expense of two refrigeration units to keep fruits and vegetables fresh for Bronx families in need of assistance.

Congratulations to Legion of Honor Members of Fordham Kiwanis 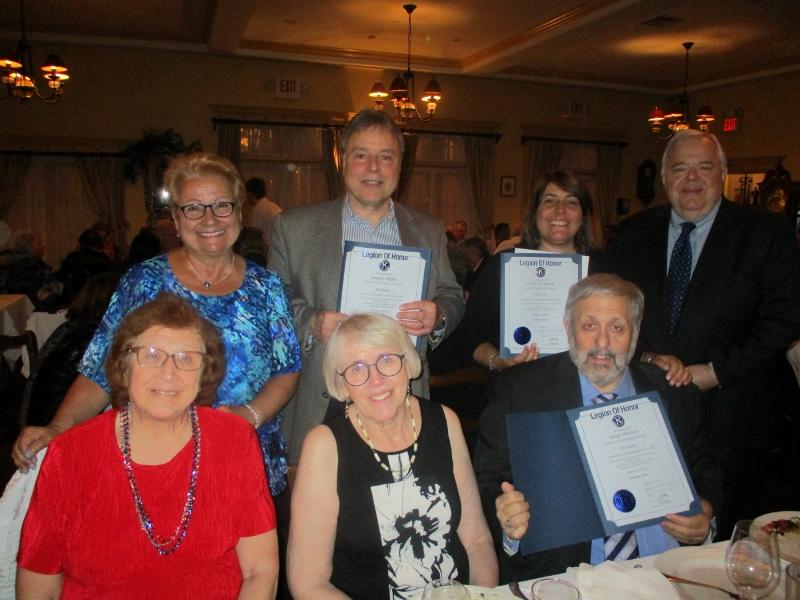 Thomas C. Giordano Middle School #45 in the Bronx held its annual induction of new members and officers at a recent meeting attended by Fordham Kiwanis President Anne-Marie Kirmse, Secretary Dr. Rosemary DeJulio, and Past International President Tom DeJulio.  Sister Anne-Marie and Faculty Advisor Michael Morgan presented officer and member pins and certificates, along with a copy of the Builders Club Handbook to each of the seventh grade class members.  The students took turns reading a "famous quote" on leadership followed by their reflections on the connection between personal development and service to others. The Builder's Club Pledge was recited by more than 25 new members who participated this past year in food collections for the needy in the neighborhood and environmental projects around the school grounds. 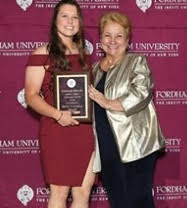 At Fordham University's 85th Annual Block F Awards Dinner on May 1, 2019; the Kiwanis Community Service Award was given to Senior Maria Trivelpiece for her volunteer work at POTS, Special Olympics, Murray Weigel, and the Fordham Center for Psychological Services. She is the 30th recipient of this Kiwanis Award presented at the Annual Block F Dinner and the first to receive it as a member of the Women's Softball team.

Learn about the luncheon.

Fordham Kiwanis Raises Funds for P.O.T.S. (Part of the Solution) 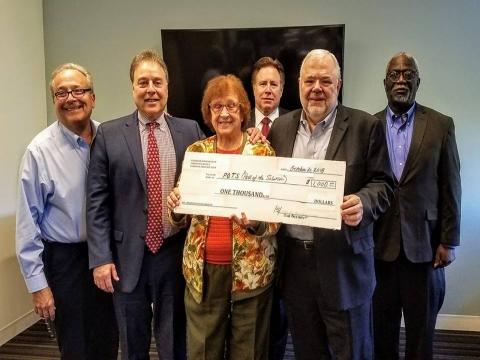 Fordham Kiwanis made a "New (Kiwanis) Year" resolution in October to raise $1000 for P.O.T.S. (Part of the Solution), a well-established agency in the Bronx serving as a "one-stop shop" assisting individuals living in poverty on their journeys from crisis to stability and ultimately self-sufficiency. See http://www.potsbronx.org/

Thanks to many gifts given in honor of Past Lt. Governor and current Fordham Kiwanis president Sister Anne Marie Kirmse celebrating her retirement from Fordham University employment, the club succeeded in making the $1000 donation within 30 days. Fordham Circle K and the recently sponsored Key Club at Fordham Prep made additional contributions beyond the $1000 goal through several bake sales held on the Fordham campus.

The club satisfied a need to provide better and larger refrigeration units to preserve large food donations to POTS.

Fordham Kiwanis hosted outgoing and incoming Circle K officers at its annual end-of-semester dinner. Two graduating seniors, Katie Dixon, and Megan Czachor were honored for their service, along with junior Mia Beverly, who was presented with a $1000 scholarship from Kiwanis Governor Candace Corsaro via the Kiwanis Children's Fund. Three charter members of Fordham Circle K, dating back 49 years were present, regaling current members with stories of service and "shenanigans" in Fordham Circle K nearly a century ago.

Circle K members described to Kiwanians the success of their year-end "use it or lose it" service project, asking students to use final balances on their meal plans to purchase non-perishable items for POTS ("Part of the Solution") a neighborhood food pantry. 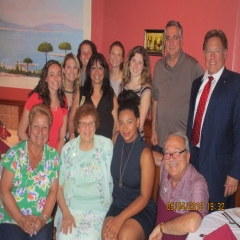 Fordham Sponsors St. Patrick's Event
Fordham Kiwanis and the Fordham Circle K hosted an early St. Patrick's Day celebration at Murray Weigel Hall, a residence for elderly and retired educators on campus. The residents were entertained by Fordham's Irish Dance group and enjoyed the club members' company and conversations. This is one of the club's "signature projects" that address the needs of seniors. 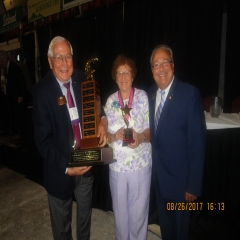 This award is presented annually to one Kiwanis member in New York State who has exhibited outstanding meritorious service to individuals in the community and has contributed in an extraordinary manner over a significant period of years to the advancement of the Kiwanis service mission. This year’s recipient is SISTER ANNE MARIE KIRMSE, O.P. who has completed twenty years as a member of the Kiwanis Club at Fordham University. She is the first, and perhaps the only, Catholic nun to serve as a Kiwanis club president and New York District Kiwanis officer. Most recently, she concluded five years as the New York State Coordinator for the second Kiwanis International Worldwide Service Project, the campaign to spare mothers the agony of seeing their newborn infants painfully tremble and suffer from the unnecessary and cruel death caused by tetanus.

Project ELIMINATE in partnership with UNICEF was designed to be the most inspirational and ambitious project ever undertaken by Kiwanis Family members to address the little known tragedy suffered by a newborn every nine minutes. As anticipated, the audacious goal to raise $110 million dollars to save millions of lives in the most impoverished regions of underdeveloped nations was met with some skepticism. However, never fearful of becoming involved in a “just cause”, however difficult or unpopular as it may be, and faithfully and personally encouraged by her many lighted Church candles, Sister Anne Marie brought the Kiwanis hallmark of “serving the children of the world” to inform and inspire Kiwanis members in all regions of the New York District. She frequently borrowed the NY State motto “Excelsior” to encourage members to be as generous as possible in their fundraising.

As a result, she successfully inspired enough clubs and members to pledge and donate New York’s “fair share” of $1.8 million. An unprecedented amount of cash gifts totaling more than $1.4 million is now working in the most remote regions of the world to bring life to as many as two million children and their mothers. Sister Anne Marie has been an honest and constructive critic at Kiwanis International campaign meetings when only the big donors appeared to be recognized. She was outspoken in her belief that not enough was being done to honor the smaller pledges or donations. It reflects her belief that every Kiwanis member is a humanitarian with a generous heart who has the capacity to give whatever one can for a common cause that helps children. She was particularly proud of all the younger Kiwanis family members, especially the Kiwanis sponsored K-Kids members in elementary schools, with whom she often spoke and who participated in “small”
ways. In so doing, these young leaders enlarged their knowledge about the poor in many nations.

Beyond her global commitment to children, one could go on for pages to list the many LOCAL club projects Sister Anne Marie initiated and coordinated with her fellow Kiwanis members as a Kiwanis club president at Fordham University and a Past Lieutenant Governor for more than a dozen Kiwanis clubs in the Bronx and Westchester. Suffice it to say, over twenty years, there have been thousands of cookies and brownies baked for collegiate Circle K club fundraisers benefitting disabled children; and along with her late mother Anna, hundreds of hours were spent knitting warm blankets for infants in homeless shelters. It is abundantly clear that she is an inspirational leader who contributes “personally” to a common cause.

The New York District of Kiwanis International is proud to honor this tireless Kiwanian who, for more than two decades, has been relentless in her desire to improve the lives of the disadvantaged locally and globally. 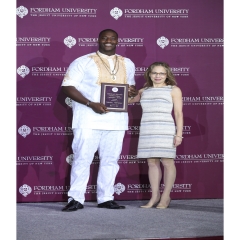 Manny found a way to get more than 24 hours out of a day, fulfilling his academic and athlete responsibilities while also finding time to perform countless community service projects. These projects include visiting with students at the Eagle Academy as part of the football program's ongoing partnership with the school where they help with their homework and serve as role models.

Manny also volunteers for the overnight work shift at a local homeless shelter and has assisted with soup kitchen meal preparation at Crestor Avenue Baptist Church. He participated in Fordham football's "Be the Match" Bone Marrow Registry drive as well as with Special Olympics. 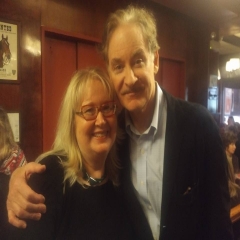 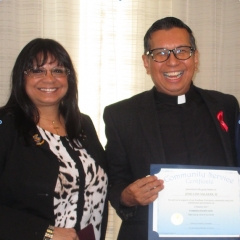 On March 8, Fordham Kiwanis sponsored a "Bread and Soup Luncheon" featuring the University's Executive Director of Campus Ministry Jose-Luis Salazar, S.J. who spoke about Pope Francis' encyclical on the environment, "Laudato Si" - On Care for Our Common Home. Father Lito gave a PowerPoint presentation to a capacity crowd showing photos from his hometown in the Philippines which suffered the deadly effects of Typhoon Haiyan in November 2013. The annual Kiwanis event is organized by Kiwanis member Sister Anne-Marie Kirmse, O.P. each Lenten season and designed to show solidarity with the most vulnerable victims of hunger, and to more fully understand how to develop habits as "ecological citizens.

Then, go encounter the least of your brothers and sisters! 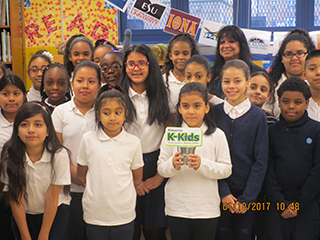 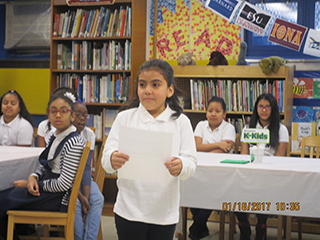 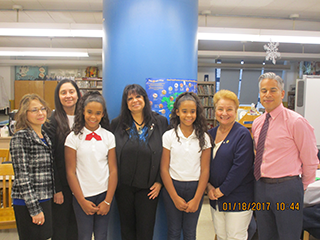 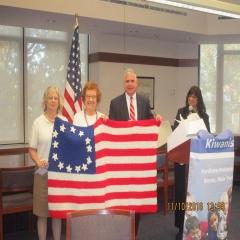 Fordham Kiwanis celebrated Veterans Day by holding a special lunch meeting featuring Lt. Colonel Michael Barrett who returned from service in Afghanistan a few months ago. LTC Barrett spoke about the many opportunities civilian volunteers can perform to help disabled veterans and the children of soldiers engaged in active military service. Anne Marie Sweeney displayed a "Fallen Comrade Table" and explained the symbolism of each item placed on the table. Fordham Kiwanis also presented a beautiful hand-knitted blanket to the speaker, kicking off the club's collection of gently used and new blankets for children living at Concourse House.

Members and friends of Fordham Kiwanis celebrated the Kiwanis ONE DAY by collecting baseball equipment to be sent to children in two schools in the nation of Jamaica. The shipment will be made in January in cooperation with the Loukoumi Foundation and Joey Foundation. Special thanks to Fordham Coach Leighton and the baseball team for helping us put smiles on faces of children who have so little ONE DAY is held in connection with USA Weekend to support more than 50,000 young volunteers in service projects undertaken on the third Saturday in October across the nation.

Fordham Kiwanis also participated in the official opening of the "Make a Difference with Loukoumi" exhibit at the Westchester Children's Museum in Rye NY. Children were offered a "day of play and learning" at the exhibit which stresses the importance of community service, anti-bullying, and seeking one's dreams. The Loukoumi Foundation was created by Kiwanis member Nick Katsoris, and graduate of Fordham Prep, Fordham College and Fordham Law, who authored the children's Loukoumi books that are being sold to raise funds for the children's projects undertaken by Fordham Kiwanis. 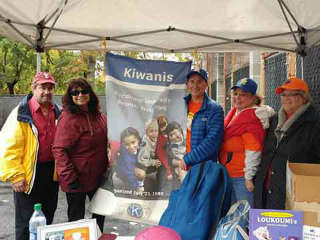 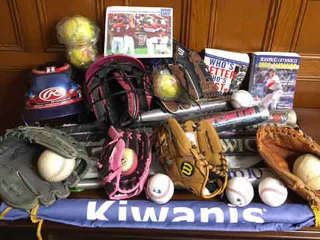 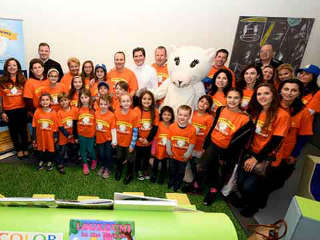 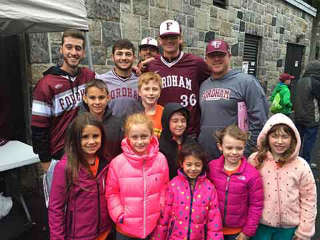 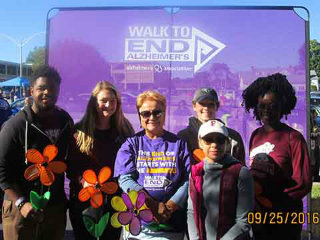 For the tenth consecutive year, Fordham students traveled by Ram Van to White Plains to join 1500 walkers and participate in the Annual Hudson Valley Alzheimer's Memory Walk to raise dollars and awareness of the disease that afflicts more than 5 million Americans and their families. Shown in the attached photo are former Fordham Kiwanis club presidents Rosemary DeJulio and Susan Brucculeri and Circle K members Phil Bedard, Megan Czachor, Katharine Dixon, and Itunu Ademoyo. Fordham Kiwanis participates in joint service projects with Circle K each year at Murray Weigel Hall and the Rose Hill Apartments. Circle K was founded on the Fordham Bronx campus in 1970. 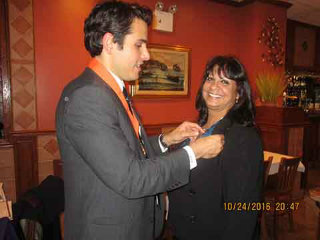 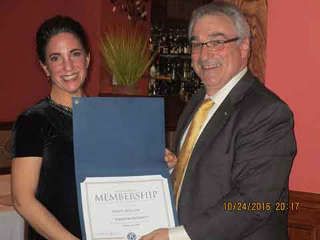 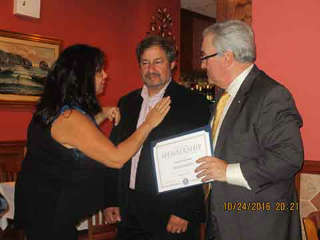 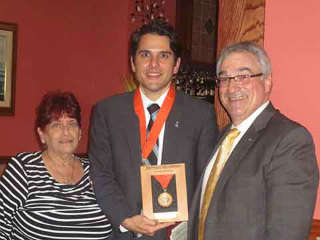