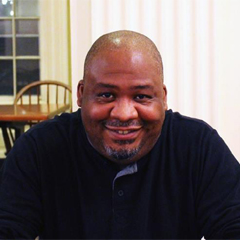 Scott Poulson-Bryant is the author of HUNG: A Meditation on the Measure of Black Men in America (2006) and a novel, The VIPs (2011). His scholarly work has appeared in Palimpsest, The Journal of Popular Music Studies, and American Studies. Before coming to academia, Professor Poulson-Bryant worked as a journalist; his work appeared in such publications as The Village Voice, Rolling Stone, the New York Times, and VIBE, the hip hop and urban culture magazine for which he was one of the founding editors. His research interests include 20th century African American literature and popular culture and gender and sexuality studies. He is currently writing Bicentennial Black: Uplift, Citizenship, and the Cross-Racial Politics of 1970s US Popular Culture. His website is https://spbvip.wordpress.com/.